Canada’s Minister of Health Ginette Petitpas Taylor announced on June 19 that the government will provide more than $3.8 million to help fund the Construction Industry Tobacco Cessation Project. The venture is the work of the Canadian Cancer Society and EllisDon, and will be available to workers at some EllisDon worksites in Ontario and Alberta with plans for expansion to more sites over the next three years. The first cities to try the program are Ottawa, Toronto, and Kingston area, as well as in Calgary and Edmonton.

“Ellis Don’s partnership with the Canadian Cancer Society is a proud example of our corporation’s commitment to the promotion of health and safety both in the places we build and the communities we build in,” says Kenny Tuff, regional director of health, safety, and environment at EllisDon in Eastern Ontario.

The program will offer tailored support to help workers quit, including an individual plan, and will offer follow up plans for 30-day and 6-month milestones. Staff at the Canadian Cancer Society and Ottawa Public Health, who have addiction and mental health training, will administer the sessions for participants. Ontario’s Tobacco Research Unit will evaluate the program.

Ottawa Public Health has done this sort of thing before – it supported more than 600 workers between 2014 and 2018 through a similar program.

The federal funds that support this program will come from the Public Health Agency of Canada, as part of Canada’s Tobacco Strategy, which was developed in 2018 and hopes to get Canada’s Smoking rate below 5 percent by 2035.

“Part of the Government of Canada’s approach to reducing smoking rates is through supporting adults in communities that show higher rates of tobacco use, such as the construction industry,” Taylor says.

Some 34 per cent of construction workers are smokers, a number that almost doubles the national average. The Public Health Agency of Canada says one Canadian dies from a smoking-related illness every 12 minutes, which represents about 45,000 Canadians per year.

“Offering tailored support and resources to construction workers at their workplace to encourage and help them to quit smoking will help address the higher than average smoking rates for this group,” says Dr. Theresa Tam, Canada’s chief public health officer. 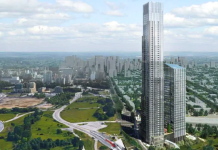 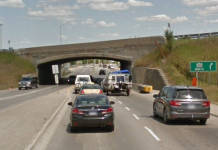 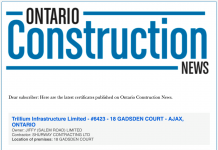