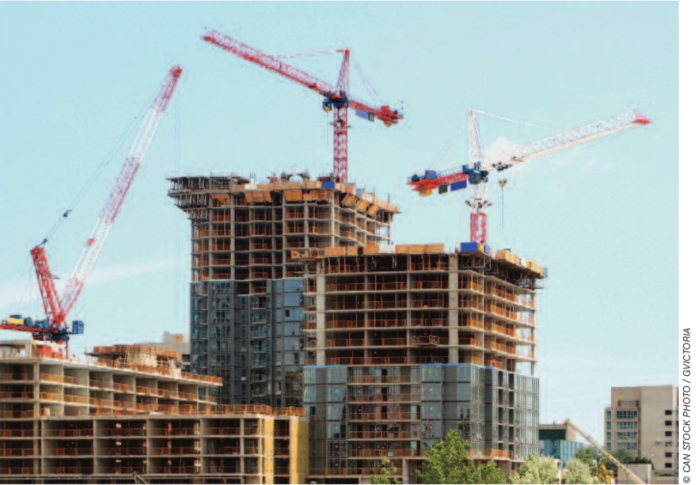 According to the real estate consultancy, this number reflects the most active real estate development in North America. In fact, he city has more than twice the number of active cranes than the next two cities on the list, Seattle, WA and Los Angeles, CA, which each reported 49 cranes in operation in July.

The Better Dwellings website which reported on the RLB data said the crane count is important because “the number of high rise projects are a major component of the business cycle.”

“When development is booming, so is the economy. A strong economy helps to drive necessary components of real estate growth. That is, there’s cash for more employment, offices, and retail spaces need to be created. All of these people need a place to live, producing more residential real estate. The reverse happens when it begins to slow down.

“The application of real estate to the business cycle is so common, RLB even gives cycle estimates.”

“The cycle is broken down in to growth and decline periods, each with three phases – peak, mid, and trough. Peak is when things are the highest, also called the top of the cycle. Mid is when project numbers are firmly starting to rise in the growth, and drop in the decline. Trough is when there’s minimal activity, and the market has bottomed. How long it spends in each one of these phases is dependent on how inefficient the market has become.”

Better Dwellings reports that Toronto real estate development topped the list again, even toppling its own record. The 2019 crane total in Toronto reflected an increase of 16 cranes from January and an increase of 23 cranes from last July’s numbers. RLB analysts note most development is outside of the city core. The projects are split between residential and mixed-use.

Even though there’s a lot of projects in the pipeline, things may cool down soon. RLB forecasts Toronto to be in the mid-decline phase for single-family development. Multi-family developments    are now at peak growth, RLB observes.

Compared to Toronto, Seattle and Los Angeles seem to be also-rans, though RLB indicates things are looking promising for Los Angeles, while Seattle may have peaked (at its lower level).  Seattle in fact had 16 fewer cranes than last year, while Los Angeles saw a gain of 13.

Meanwhile, Calgary is seeing some signs of health, with 34 cranes at construction sites in July, compared to eight last year.

RLB analysts earlier in the year forecast a global real estate slowdown, because of general economic slowing, along with tighter credit conditions and trade tensions.