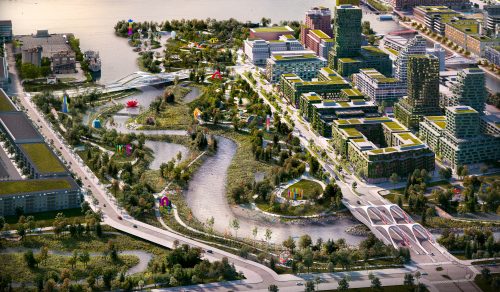 The Pierre Lassonde Family Foundation has announced a $25 million donation to the City of Toronto to build a new public waterfront art trail.

The donation is the largest arts-related gift Toronto has ever received and will be used to construct a trail through parks along the banks of the Don River in Toronto’s Port Lands. The project will entail two permanent pieces — one Canadian and one international — and a rotating cycle of contemporary installations from local, national and international artists.

Waterfront Toronto is building the parks, as part of the Port Lands Flood Protection Project to transform the area.

The donation includes $10 million to commission two permanent arts works, and up to $15 million to establish a non-profit organization called the Lassonde Art Trail to manage the trail, with the intent to raise additional matching funds to sustain the organization long-term.

Mayor John Tory said the waterfront public art trail “will not only attract residents and visitors to Toronto’s waterfront, but provide an opportunity for people to experience art and much more for free.”

The art trail will serve as a “free, accessible outdoor museum for visitors and residents alike — all of which play a big role in bringing art to public spaces in our city.”

The Toronto city staff report will be discussed in council meetings on July 19 and 20, seeking authorization for the necessary agreements in order to accept the donation for the artworks in the months to come.

If it receives approval, the Pierre Lassonde Family Foundation will launch an international competition to commission the two new art works that will anchor the waterfront trail.