The City of Toronto has achieved a construction milestone in the strategic rehabilitation of the Gardiner Expressway between Jarvis and Cherry Streets. Crews have replaced the concrete deck and steel girders on the north half of the expressway, the westbound off-ramp to Sherbourne Street and repaired the westbound off-ramp to Yonge-Bay-York Streets, and will now transition to renew the south half of the expressway for the final phase of work.

Crews will primarily work around-the-clock on a 24/7 basis to accelerate the project and reduce the length of construction. The majority of the most disruptive work should be completed by 11 p.m. most days. However, in some instances disruptive work must be performed overnight for the safety of crews and the travelling public.

To complete the work in a way that’s faster and less disruptive than traditional methods, the city is using an innovative construction technique called Accelerated Bridge Construction to replace the expressway concrete deck and steel girders.

This technique involves pre-fabricating the new sections of the expressway, or panels, off site and transferring the new panels into place where existing sections have been removed. This method causes less dust and noise and can reduce construction time by up to 40 per cent.

The project is significant, given the scale of the work with the added complexities of the work zone located in an urban centre, in close proximity to buildings and over a major arterial road. 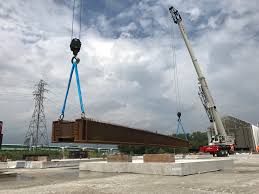 More information about this work is available here.