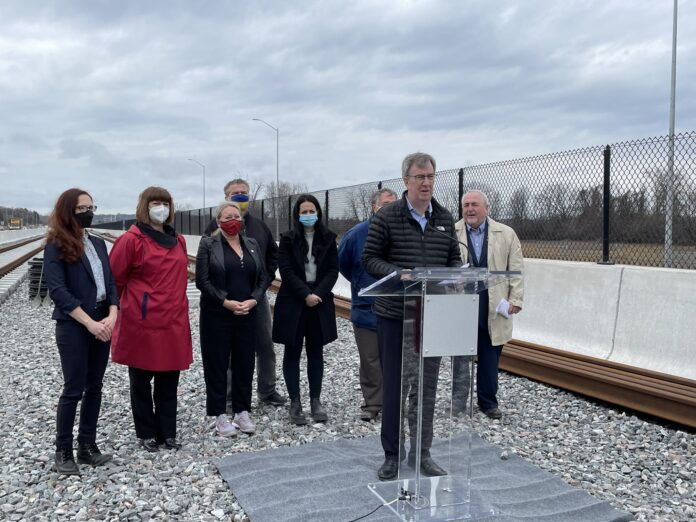 Federal and local politicians staged an April 26 media event to mark the start of track installation on Ottawa’s $4.66 billion Stage 2 Light Rail Transit (LRT)project. They viewed progress on the LRT’s eastern extension, even as reporters learned that the western side of the project is facing delays because of supply and labor shortages.

City staff arranged for a bus to take news media representatives from City Hall downtown to the Stage 2 East Extension site for the photo shoot.

The O-Train East Extension will travel mainly within the OR 174 median, between Blair Road and Trim Road, adding 12.5 kilometres of new rail and five new stations. The extension connects 95 percent of residents in the communities of Orléans, Blackburn Hamlet and Beacon Hill within five kilometres of rail.

The East-West Connectors Consortium is building the LRT project through a Design/Build/Finance (DBF) contract model. Construction will be completed by a consortium of Kiewit, Eurovia and Vinci (KEV) while WSP and Canada Inc. and Hatch Ltd. are providing design and engineering services.

Construction is well underway, and all 25 kilometres of track installation on the eastern side of the project will be complete by the end of 2022, the city said in a statement.

The story is less clear for the western side, from Tunney’s Pasture to Moodie Drive.

“At this time, we are still analyzing the schedule,” Chris Loeffler, senior vice-president at Kiewit Corporation, told journalists on the tour, when asked whether the line would be completed by the 2015 target date.

“We’ve got some geotechnical issues, as well as some other supply issues,”  Loeffler said. “We’ve got an issue with getting enough manpower. So we’re bringing in a lot of of carpenters and labourers from other provinces to help out with that.”

On the eastern side, the consortium is also facing supply and labour challenges, but still expects the work to be completed on schedule in 2024.

“We’re having a hard time getting some of our supplies out of different areas, supply chain problems that we’re seeing — we’re working through those as they come,” said Loeffler. “But all things considered, we look to be on time on the east.”

A 240-metre test track west of Jeanne d’Arc was installed in December 2021, and the main line track installation began in April, near the future Jeanne d’Arc Station. Construction of all O-Train East Extension stations are in progress.

The O-Train East extension will use approximately 32,000 concrete ties, each weighing 600 pounds.  Some 90,000 tonnes of granite rock ballast from Wakefield, Quebec will be used, with steel clips set in place by specialized temper machinery.

Crews will begin installation between Montréal and Jeanne d’Arc stations and continue west. Final installation will be from Blair Station to Montréal Station, the city says.