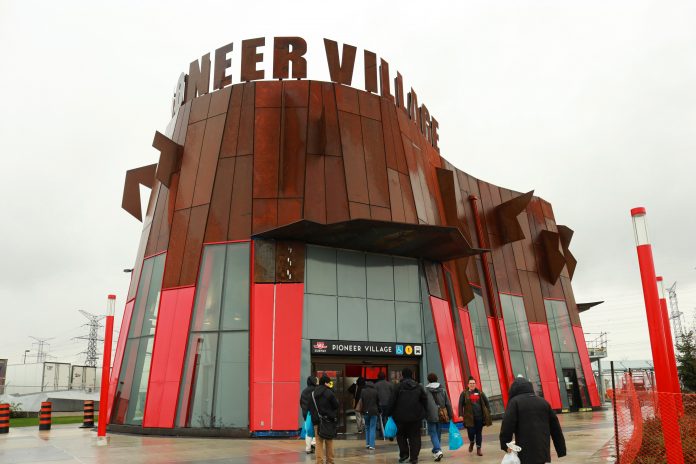 The Toronto Star has published an extensive report about construction problems, delays and litigation relating to the Pioneer Village Subway station, outlining how construction disputes can evolve into complex and daunting litigation.

The story relates to one of the six stops on the Toronto Transit Commission’s recently opened (and much delayed) Spadina subway extension.

The Star reports court documents filed in the litigation between the TTC, the station’s main contractor, and design consultants describing allegations of: “subway station plans so filled with errors they required thousands of revisions. Faulty waterproofing that led to leaks onto the tracks. Changes to designs that forced crews to demolish work they had already completed. A single public art piece that took six years to build and install.”

The allegations haven’t been proven in court.

General contractor Walsh Construction has sued the city, seeking $218.8 million for alleged breach of contract, negligence and amounts owing. However, the TTC denies the claim and has countersued Walsh for $22.4 million in liquidated damages for delays it asserts are the contractor’s responsibility.

To complicate things more, the TTC has also sued the consultants it selected to design the station, Spadina Group Associates (SGA), alleging “they breached their contract by supplying faulty plans,” the Star reports. The consultants conversely deny the claims.

The station is just one part of the complex litigation involving the $3.2 billion Spadina subway extension, which opened hundreds of millions of dollars over budget and two years late in December 2017.

The TTC contracted sections of the 8.6 km subway extension to different companies. Walsh won the $165.9 million Pioneer Village contract in 2011. It was supposed to complete its work on Nov. 5, 2014, but the company says it didn’t finish the project until almost three years (953 days) later on June 15, 2017.

Walsh asserts in its statement of claim filed in 2017 that the TTC provided “incomplete, inconsistent, unconstructable and uncoordinated” designs for Pioneer Village, requiring more than 3,100 revisions through the construction, “many of which included multiple revisions” to the same design. The company also alleges the TTC issued 445 changes to the station contract, but refused to fairly compensate Walsh for increased costs the company incurred in changing the scope of the work.

In a 2018 statement of defence, the TTC acknowledged responsibility for 411 days of delay and says it already has paid Walsh for them, but agency argues the contractor should be prohibited from seeking further compensation for those delays.

In its statement, the TTC asserts “Walsh’s claims are baseless and without merit,” and alleges the company was “unprepared or unable to carry out the work in accordance with the contract” and “fell significantly behind schedule from the immediate outset.”

The Star reports that court decision issued earlier this year about what evidence should be admitted in the Pioneer Village case shows that Walsh cited another alleged problem with the station’s design: deficient waterproofing that led to “trainway leaking.”

Walsh asked the court to order the TTC to provide information about leaks at Finch West station, (which also is under multi-party litigation), designed by the same consultants as Pioneer Village, arguing it was relevant to the case. The court agreed.

In its counter claim, the TTC alleges Walsh didn’t properly co-ordinate its work and that of its subcontractors, didn’t conduct proper inspections or correct defective work in a timely manner, and failed to employ adequate construction methods and techniques.

As of last year,  TTC’s contract with Walsh to build Pioneer Village had increased to $223.8 million from the original price of $165.9 million, as a result of what an agency spokesperson described as “various changes” to the deal including “additional contract scope,” The Star reported.

The TTC has also sued Spadina Group Associates (SGA) for $10 million in damages, alleging the group of three companies, breached the terms of their contract by, among other allegations, failing to provide designs that “were substantially free of errors,” were prepared with the necessary degree of skill, and conformed with building codes and the TTC design manual. SGA’s original contract was for $15 million.

However, in statements of defence filed in 2018, the companies belonging to SGA deny the TTC’s allegations against them, saying they didn’t breach their contract and weren’t negligent in the performance of their duties. The companies state their designs weren’t deficient, and any errors they did contain were minor and typical of any major infrastructure project, the Star reports.

“We have a very positive and amicable relationship with the TTC and continue to work collaboratively with them on a number of projects in the city,” said two of the companies that made up SGA, the IBI Group and LEA Consulting, in separate but similar statements to the newspaper. Each said they “are working co-operatively to achieve a resolution in the matter.”

The third company, WSP Canada, declined to comment to the Star, saying it couldn’t discuss ongoing litigation. However, in its 2018 statement of defence the company said it “performed its work on the project in a competent and prudent manner in accordance with the prevailing professional standards in the Province of Ontario.”

In a statement to The Star, a Walsh spokesperson said it “strongly stands behind the quality of its work and is vigorously pursuing a fair resolution of its claims for which Walsh and its subcontractors firmly are entitled.” The company said it performed its work “honourably” and “under extremely difficult conditions.”

The Spadina project will likely be the last subway extension overseen by the TTC. The Ontario government has passed legislation allowing the province to take over new subway builds in Toronto, citing the TTC’s poor management of past projects as one of the reasons Queen’s Park needed to intervene.