The new video includes drone footage, time-lapse video and project highlights of PDI’s demolition and behind the scenes details about how the project plan was put together.

“I think everyone’s excitement level is through the roof at the start of a job, but once you get into it everyone sort of calms down and settles into place and then . . . everyone gets really good with the flow,” Brian Priestly, vice president of operations.

“You can break something down in a big hurry, but then you’ve got to clean it up in a big hurry.”  The removal of the ramp is part of the City of Toronto’s Gardiner Expressway Rehabilitation Plan and its Port Lands Flood Mitigation Protection project.

The site is located about 90 kilometres west of the coastal community of Attawapiskat First Nation, a remote location with no access roads and harsh weather required extensive planning and contingency plans. 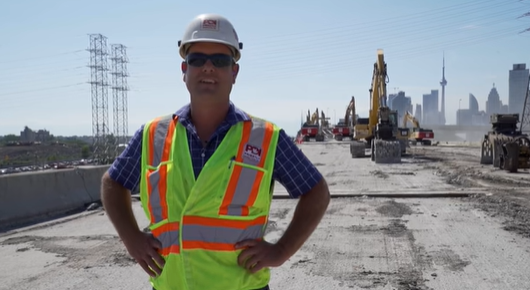 A Hercules plane program was developed to fly in machines, equipment and materials to site and workers were flown in on weekly-chartered flights. Crews worked on two-week rotation shifts, seven days a week, 12 hours a day.