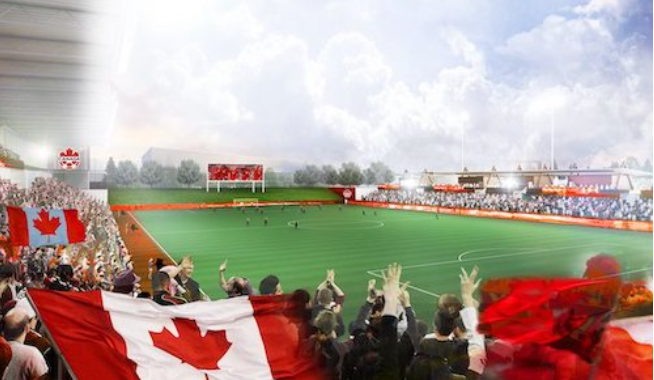 Woodbine Entertainment is partnering with private investors to build a soccer training facility and soccer-specific stadium and designate a portion of its land for construction of the venues to create a national training centre for Canadian soccer.

The project is still in the planning stages, however, the land in question remains available and construction could potentially be completed sometime in 2023. The soccer venues would be located on Woodbine’s property within walking distance of Woodbine Racetrack.

The project would include a soccer-specific stadium and 38,000 square foot training facility with a world-class grass surface that would meet the professional standards established by FIFA, soccer’s world-governing body.

Woodbine is situated on about 684 acres of land located just over 30 kilometres north of downtown Toronto. Roughly 250 acres is already earmarked for horse-racing (synthetic, grass and dirt racetracks as well as stables for horses and employees).

Another key element of the soccer plan is the construction of a GO station at Woodbine. In 2019, the Ontario government unveiled plans to build a stop at Woodbine on the Kitchener GO rail line, with the province and Metrolinx partnering with Woodbine Entertainment.

“With Canada on the brink of qualification for the 2022 FIFA men’s World Cup, the women’s national team’s Olympic gold medal win and Canada co-hosting the 2026 World Cup, the time is certainly right for us to show our support for Canada’s growing soccer community,” Jim Lawson, Woodbine Entertainment’s CEO, said in a statement.

“We see the power of the game in bringing people together and we cannot think of a more complementary sport as we look to further grow and sustain the horse racing industry and the 25,000 jobs it supports throughout the province.”

The soccer-specific stadium would have a seating capacity of 8,000. Woodbine said the projects would provide “a key training base and stadium for Canadian Premier League clubs, including York United FC.”

York United FC currently plays its home games at York Lions Stadium on the campus of York University. The franchise’s principal partner is Greenpark Group, a company specializing in residential and commercial construction in Canada, the U.S. and Europe that’s owned by the Baldassarra family.

“We are a family of builders and share Woodbine’s vision of creating communities for a better Toronto,” said Michael Baldassarra, York United chairman and Greenpark Group executive. “We have been so proud to invest in the future of Canadian soccer in recent years and a high-performance training centre and stadium is perfect for what is to come as we see the women’s game poised to take giant leaps across the county.

The venue could also be home for a Canadian women’s professional squad. In addition, it could serve as a practice facility for the 2026 World Cup, which will be staged in Canada, Mexico and the United States.

“The 2026 World Cup is an amazing target for so many of us working in Canadian Soccer right now, but before there many other major events that Canadian athletes will need to prepare for,” said Angus McNab, the president/CEO of York United FC. “Facilities and infrastructure for the professional game to thrive are required and this location is ideal.

“We would also be very proud to plant the flag to bring the first women’s professional team to Canada as part of a much-needed domestic league.”