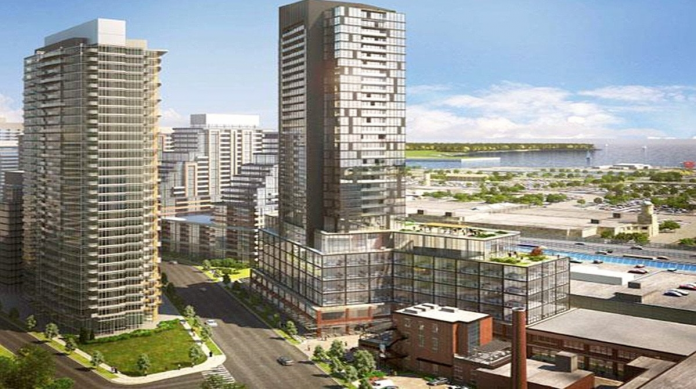 After five years of planning and a lengthy review and approvals process, the shovels are in the ground for the foundation of what will become Liberty Market Tower, a 28-story structure at 171 East Liberty St. in Toronto.

Demolition permits for the building designed by Wallman Architects were approved in mid-2018 and the east end of the Liberty Market Building was torn down. Shoring began at the end of the year.  Foundation work has started, as shoring continues elsewhere on the site, Urban Toronto has reported.

Excavation has started for a 3.5 level, 298 space underground garage. Then a tower crane will be installed to begin forming the foundations and underground parking levels.  It will take at least a few months before the work reaches grade and the building begins to rise to a height of 99.9 m.

Part of the original Liberty Market Building was demolished to make way for the tower.  The new development’s podium will reinterpret the heritage warehouse’s style in a modern form, with new ground floor retail space, while levels 2 through 7 of the podium will be used for offices, including a WeWork location. Then there will be an 18 story condo on top, with 281 units.

The project’s developer is Lifetime Developers.