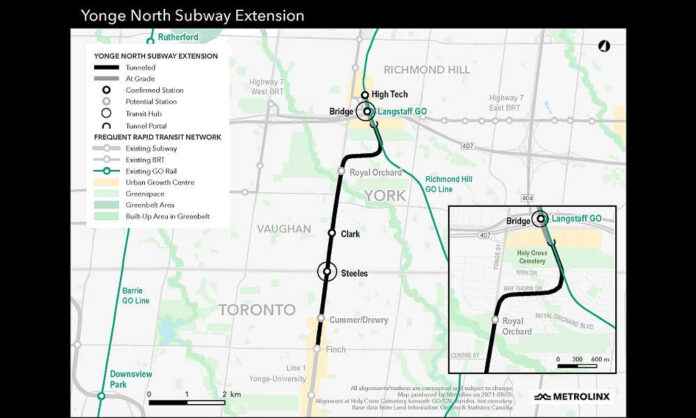 York Regional Council has approved $980 million in capital costs in 2022 to support growth and maintain existing infrastructure in a state of good repair.

The budget introduces an incremental one per cent Rapid Transit Infrastructure Levy to help fund the region’s $1.12 billion portion of the Yonge North Subway Extension (YNSE). The incremental 1% will be added to the base budget, generating approximately $12 million in the first year. Development charges will also help fund the project.

Metrolinx officials announced Dec. 14 they are looking for teams who are interested in completing early upgrades at Finch Station before major construction on the Yonge North Subway Extension begins.

The Request for Qualifications asks any interested teams to share their qualifications and construction expertise so they can be included when the bidding process begins next year.

Major construction is to start in 2023.

“The York Region Fiscal Strategy promotes financial sustainability and helps guide future capital projects, how much the Region saves in reserves and how much debt the Region can safely take on. It’s due to our well-managed fiscal strategy that York Region has the highest possible rating with credit rating agencies,” said City of Vaughan Mayor Maurizio Bevilacqua.

Highlights of the 2022 capital budget: