Even a global pandemic that has virtually shut down the Canadian economy couldn’t stop Hospice Huronia from opening its new five-bed residential hospice in Penetanguishene in April.

Opening the $4.7 million Tomkins House residential hospice during a worldwide pandemic presented many unique and unexpected challenges, according to executive director Debbie Kesheshian.

In mid-March, when the province introduced measures to limit the spread of the virus and shut down all non-essential businesses there was a stumbling block as Tomkins House was on the verge of being completed at the time.

“Fortunately, Bertram Construction came through for us and finished the build on time and on budget,” Kesheshian said in a statement.

Building a residential hospice was a unique experience for the Bertram crew, as the project was overseen by a volunteer board and completed under the watchful eye of the grateful community.

The project was delayed due to lack of funds until Nicola Tomkins stepped up with a $1.56-million cheque to Hospice Huronia, saying she wanted to get the project back on track after hearing plans for the five-bed residential hospice had been put on hold.

That donation opened the door for Officials and local dignitaries to hold a ground-breaking ceremony at 948 Fuller Ave. in Penetanguishene on May 17, 2019 to launch construction. 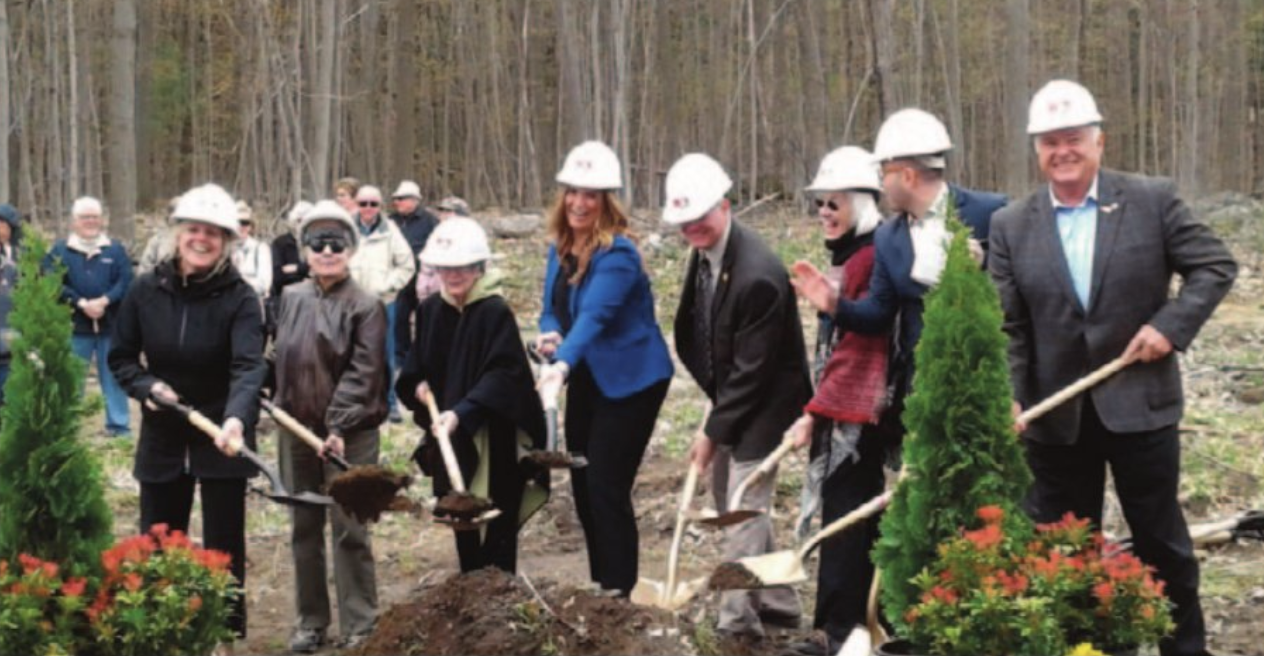 “I do not know if I can point out just one item on this project that is unique,” said Brooks Smith, Bertram’s project manager. “From the volunteers that I have seen involved to the generosity of the trades every aspect of the project has been unique in its own way.”

An official grand opening will take place once COVID-19 restrictions are lifted.

Tomkins House, which benefitted from a $1.56-million donation from Nicola Tomkins, is a complex build. Larger doorways, specialized laundry facilities, special tubs and lifts, multiple washrooms and a nurse call station all must be included.

Bertram was praised throughout the build for “doing an amazing job keeping the project on schedule, organized and safe.”

“Like every project there have been the ups and downs, but with the hard work of all the trades, Bertram, +VG Architects and Huronia Hospice everyone has been exceptionally understanding and prompt when it has come to meeting the projects schedule and deadlines,” Smith said.

“This allowed us to establish a team presence with everyone. On site and off site tasks were all handled in a timely and professional manor allowing all trades, Bertram and the consultants to come up with value engineering proposals to the client as cost saving ideas.”

In addition, there was extra consideration given to reducing costs and some trades made significant donations of their time and/or materials towards the project.

“Working with the community has been amazing,” Smith said. “They have been very involved in everything going on from the site meetings to hosting lunches for the trades on-site to show their appreciation.

That commitment and consistent level of interest and involvement from them shows how much Tomkins House means to the community.

“It is a great feeling,” Smith said.

Windows were donated by DeCola Windows and Doors and Hometech Windows. As well, Ideal Lease transported the windows and C.R. Larson and Jim Capeling donated their time and materials to install the windows. Also, Brampton Brick donated the brick for the exterior.

Tomkins House is expected to serve an average of 150 residents and offer further supports to around 750 family members each year.

Throughout the building there are unique items in place to make every day easier and more comfortable for residents, from the specialty lifts and bathtub to smudge rooms, and all the carefully-chosen finishes that were chosen to create an atmosphere where residents feel like they are right at home.

“This project was a success because it truly emphasized team work on all fronts,” Smith said. “From the Bertram team, consultants, hospice staff, board members and volunteers, and our subcontractors; we all collectively worked together to deliver this project on schedule.”