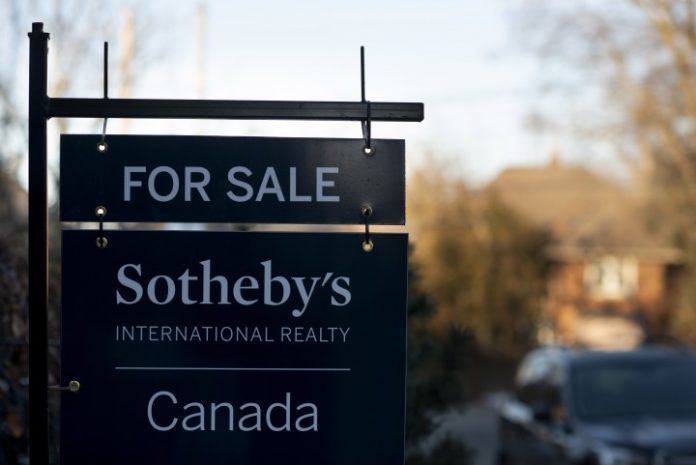 The Toronto Regional Real Estate Board says home sales were down 69 per cent in the first 17 days of April compared with a year ago as the COVID-19 outbreak put a chill on market activity.

The drop came as both economic worries and the state of emergency slowed sales, said board president Michael Collins.

“Homebuyers and sellers have concerns about the economy and indeed their own employment situations. On top of this, many buyers and sellers are avoiding any type of in-person interaction,” he said in a release

Sales, totalling 1,654 homes, declined the most in the condo segment that attracts a high share of first-time buyers who have more flexibility on timing. Higher-end detached sales in the City of Toronto also saw elevated declines.

The board says new listings declined a similar 63.7 per cent to 3,843, leaving market conditions tight enough to support the average selling price in line with 2019 levels.

It says the average selling price was down 1.5 per cent to $819,665 as both general uncertainty and the types of homes being sold affected the average.

“That decrease is a little deceiving, because we’re used to substantial increases.”

He said he expects price declines to be moderated as homeowners defer or restructure payments and foreclosure and power-of-sale orders are at least a year away since courts are currently closed.

The lack of new listings is also helping to prop up prices, though current listings could see some downward pressure on prices, he said.

“It’s not the right time to sell right now. So if you do see a listing coming out, you assume it’s someone who’s motivated to sell.”

Earlier this week, National Bank noted in a report that it expects the cooling activity to especially affect home price trends in markets like Toronto, Hamilton, Ottawa, Montreal and Halifax that had recently been propping up their national home price index.

“We expect the loss of momentum to be more prevalent in the metropolitan markets located in Central and Eastern Canada.”

For buyers, Glaysher said he does see some opportunities and a general lack of bidding wars, but there are the complications of having to do much of the viewing virtually. He said some condo buildings have banned showings entirely unless there’s already a conditional sale in place, while all real estate boards have urged to stop open houses.

TRREB reported that condos saw sales drop 72 per cent and new listings were down 54 per cent, while the average price was down 1.8 per cent.

Detached home sales were down 69.1 per cent, new listings down 68.4 per cent, and the average price down 4.6 per cent.

Semi-detached and townhouses saw similar levels of activity decline while their average prices rose by 2.9 per cent and 3.8 per cent respectively.

TRREB said the market could see year-over-year average price declines through the second quarter, though it expects the average price for the year to likely remain near the 2019 level because of the overall lower volume of sales expected during the quarter, and the strong price growth seen in the first quarter.