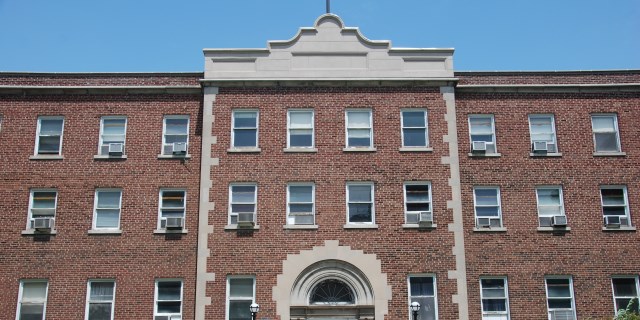 The repurposing of the old Victoria Hospital site on the banks of the Thames River in London seems set to continue after the City’s corporate services committee last week endorsed a staff recommendation to put additional lands up for sale.

Staff recommended the City sell close to 2.4 hectares of land sitting north on South Street, bordered by Waterloo and Colborne streets. The old hospital lands are being developed in two phases, with the first including the sale of land to a Toronto-based builder, Medallion Corporation, who wants to construct a two-tower residential development with a total of 586 units, a public courtyard, and the extensive retrofitting of the Colborne Building for office and retail uses.

The City agreed to sell the land to Medallion in May 2017, according to a staff report. The two towers will be 18 and 23 stories. The land was purchase for $2 million. Conditions of the sale include: a requirement that the heritage Colborne Building be rehabilitated, repurposed and conserved; the execution of the development proposal submitted by Medallion Corporation – with a requirement to initiate and complete the project expeditiously; and financial contribution from Medallion towards the construction of the promenade and mid-block connection.

“This represents the opportunity of a century for a neighbourhood in the heart of our city,” former Mayor Matt Brown said at the time. “I’m looking forward to seeing cranes in the sky as Medallion invests in our vision to grow inward and upward.”5

This future development and adaptive reuse of a cultural heritage resource represents substantial investment in the area and is a transformational project that will implement the vision of the Old Victoria Hospital Secondary Plan. Construction of this project is expected to begin in 2020, says the report.

As plans to redevelop the old hospital property progressed, the City undertook assessments related to the cultural heritage resources of the Old Victoria Hospital lands, says the report. The City subsequently decided to retain the Colborne Building, the Health Services Building, and the 1922 portion of the War Memorial Children’s Hospital, all located on the old hospital lands.

Council, following community discussions in 2012 and 2013, approved the demolition of buildings on the south side of South Street, with the exception of the Colborne Building. The work was largely completed by the end of 2014. Phase two called for the demolition of buildings on the lands bounded by Waterloo, South, Colborne, and Hill streets, with the exception of the Health Services Building, and the 1922 portion of the War Memorial Children’s Hospital (buildings 50 and 52). The second phase demolition has been concluded, and “these two buildings have been turned over to the City for future adaptive reuse,” says the report.

The City prepared conceptual models to explore redevelopment opportunities and options for the phase two lands.

“These models include the integration and adaptive reuse of Building 50 and 52 in combination with new development on the cleared lands. Assumptions regarding building heights, densities and land uses were guided by the policies of the Old Victoria Hospital Secondary Plan. Conceptual redevelopment scenarios illustrating the maximum heights and densities that could be obtained through a bonus zone have been produced and demonstrate that approximately 400 to 650 new residential units can be accommodated on the lands.”

Preliminary indicators, the report continues, shows “that there is a reasonable expectation that a developer would be able to meet the minimum internal rate of return in the higher density scenarios, while taking on the stabilization of the two buildings.”

In order to move ahead with the sale of the lands, they would need to be declared surplus, and staff is recommending that council proceed with declaring the lands surplus. Committee endorsed the recommendation.