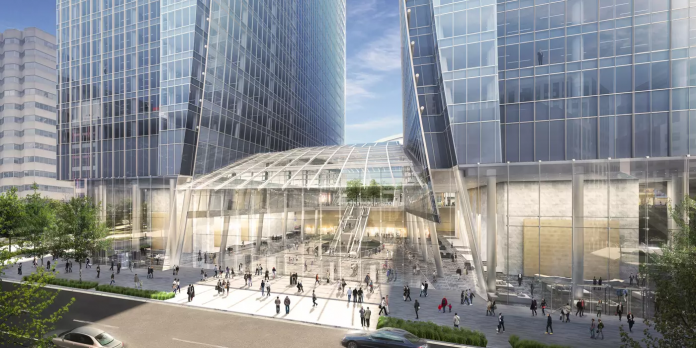 Union Park at Front Street West near John Street will include two office towers of 58 and 48 stories, plus two residential towers. The overall project value is expected to be greater than $3.5 billion, creating more than 22,000 construction jobs.

“This is a transformational project in one of the most exciting development nodes in Toronto,” said Eric Plesman, Oxford’s executive vice-president for North America.

The Canadian Broadcasting Corporation reports that Oxford says it has started its public engagement process for the proposed development, and will be working collaboratively with key stakeholders to advance the municipal entitlement process. Oxford also says it is working with the City of Toronto to obtain additional feedback.

“Our goal at Oxford is to connect people to exceptional places, so we are creating an ambitious project that adds to Toronto’s ongoing evolution as a world-class city to live and work in,” Plesman said.

Mark Cote, head of development Oxford’s Canadian arm, said Union Park will benefit from the experience the real estate company has garnered through developing and owning some of the best office, retail, and residential properties across the globe.

“The new park is a unique opportunity to create a true city-building project that benefits our city for generations to come,” Cote said. “Our plans are at a very early stage, but we look forward to working with the multiple stakeholders and adjacent land owners involved to make this opportunity possible for the city.”