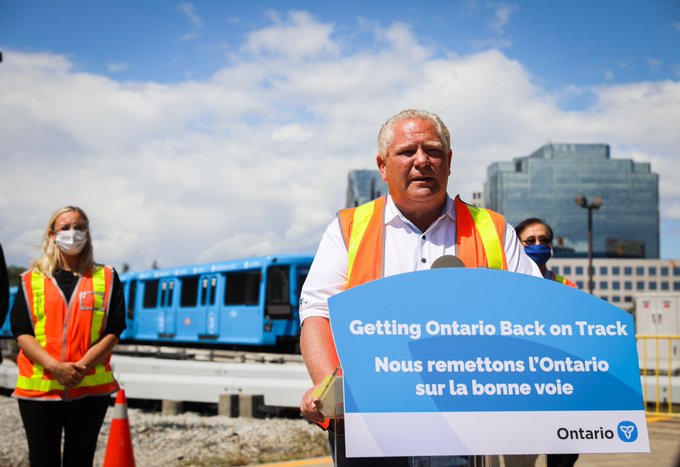 The largest subway expansion in Canadian history is moving forward today, with the Ontario government releasing a Request for Proposals (RFP) for tunnelling work on the Scarborough Subway Extension.

“After waiting over 30 years for a subway, our government is taking another critical step forward to build the improved, three-stop Scarborough Subway Extension for the people of Scarborough,” Premier Doug Ford announced.

“This is a critical step forward. There is no going back now and during construction this project will support 3,000 full-time jobs”

The province has invited the selected teams from the Request for Qualifications process to respond to an RFP that details how they plan to design and deliver the tunnelling work for the Scarborough Subway Extension. Upon evaluating the proposals received, Infrastructure Ontario (IO) and Metrolinx expect to award this tunnelling contract in mid-2021.

At a media conference in Scarborough, Ford spoke about his late brother Rob, former Mayor of Toronto, who made the Scarborough subway a priority.

After years of work, “we’re finally making huge, huge progress, and as sure as I am standing here today we are going to deliver the full three-stop Scarborough subway.”

The $28.5 billion four-line subway plan is “a nation-building investment in transit for the GTA … the most ambitious transit project this country has ever seen,” Ford said. It will reduce gridlock, create jobs and help drive construction of more homes.” 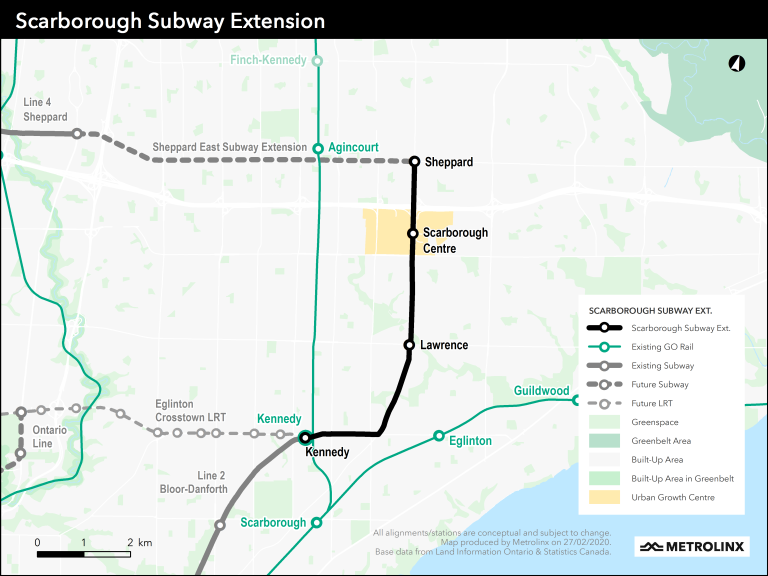 The station will also offer bus connections to both Centennial College’s Progress Campus and the University of Toronto Scarborough Campus, which provide education and employment opportunities to almost 30,000 students and staff.

The terminal station will be built at Sheppard Avenue East and McCowan Road. With the route extending north of Highway 401, customers travelling to or from the northern parts of Scarborough will have a new, faster transit option. In fact, fewer buses will be needed on the streets because routes that feed into the terminal station will be shorter, ending here instead of at Scarborough Town Centre.

As well, this station could connect to a potential future Sheppard Subway (Line 4) extension.

“The RFP release is the next step in our plans for transit expansion in Scarborough as we develop a world-class transportation network that gets people where they want to go, when they want to get there,” said Caroline Mulroney, Minister of Transportation. “Each project milestone demonstrates our commitment to building a modern, efficient rapid transit network that best serves Scarborough for generations to come.”

To expedite work on the Scarborough Subway Extension, tunnelling will begin first, followed by separate contracts for the balance of the work.

“Issuing this RFP demonstrates that we are making progress on these priority subway projects to reduce commute times,” said Associate Minister Surma.

On August 5 Ontario announced three teams of bidders per project were shortlisted to advance tunnelling work on two of the four priority transit projects, the Scarborough Subway Extension and the Eglinton Crosstown West Extension, included in the Subway Transit Plan for the GTA.

In April 2019, the province announced its historic new transportation vision, with a preliminary estimated cost of $28.5 billion. In addition to the Scarborough Subway Extension and the Eglinton Crosstown West Extension, this plan includes the all-new Ontario Line and the Yonge North Subway Extension.

Planning is underway for all four priority projects and procurements will be staged to ensure each project is delivered successfully.

The Scarborough project will extend the Toronto Transit Commission’s (TTC) Bloor-Danforth Line 2 approximately 8 kilometres with three stops, from Kennedy Station to a new terminus at Sheppard Avenue and McCowan Road.

A Preliminary Design Business Case estimates the extension will provide 38,000 people with walking distance access to rapid transit and see 105,000 daily boardings by 2041 and reduce the number of vehicle kilometres travelled during rush hour by 30,000.

In February 2020, Ontario and Toronto announced the signing of the Ontario-Toronto Transit Partnership Preliminary Agreement, confirming their partnership to deliver on the government’s plan and build the four priority subway projects faster.