Before he died in 2019, DeVries took many photographs of construction projects, and community activities within Ottawa’s construction community.

Algonquin journalism program professor Ralph Plath said de Vries died last August “while on his way home from pursuing soe of his greatest  passions – a day out exploring the wilderness in his kayak with a camera. Ron was rarely without a camera and always pushed his creativity and technical expertise no matter what he was photographing.”

Plith said the college is inviting de Vries’ friends and supporters to contribute to the award fund in his name “Our goal is to raise $15,000 so that the fund will carry on in perpetuity to support students at Algonquin College,” he wrote in an email message last Wednesday.

“Aside from being an incredibly active photographer, Ron was always keen to teach others his craft. For nearly 10 years, he taught as a Continuing Education Photography Instructor for the Ottawa-Carleton District School Board and with Algonquin College, delivering courses such as Basic Photography, Darkroom Techniques and Advanced use of Flash workshops,” Plith wrote.

“Ron was a huge inspiration to many people, not only for his expertise in photography, but also for his love of nature, environmental causes, and compassion and generosity towards others. It is fitting that this award will honour his name and his memory will carry on through the dreams of future students.”

You can view his work at http://www.rondevries.com. 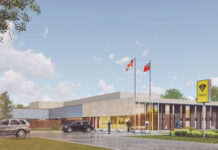