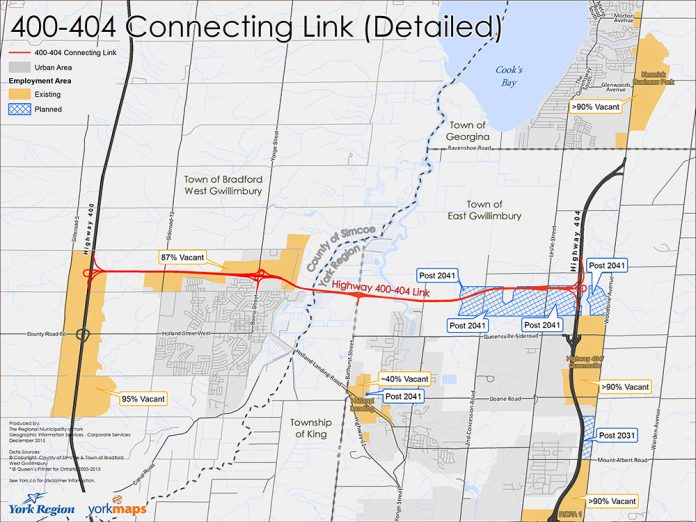 It’s been more than four months since Ontario’s Minister of Transportation Caroline Mulroney and Premier Doug Ford visited Bradford to announce their support for the Bradford bypass project.

With work yet to begin, however, MPP Michael Coteau stood up in the Legislature last week to question the status of the project and the “delays in promised infrastructure.”

“The premier was up in Bradford this August with big fanfare about the Highway 400-404 link. The minister (Mulroney), as the local MPP, said getting the Bradford bypass built was her number one priority,” Coteau said. “What progress has actually been made since August? The good people of York-Simcoe would like to know.”

In response, Mulroney said it was the Liberal government which cancelled the original Environmental Assessment (EA) back in 2003.

“The people of York-Simcoe and the people of York Region and Simcoe County have been waiting for this important link to connect people and to connect goods between the 400 and the 404,” Mulroney said. “Our government announced plans to restart the EA, and we’re in the process of doing that work.

In a press release from Coteau, he questioned whether the EA is the same one used from 2002, or if the government is working on a new one.

“There’s a big difference in terms of timelines for the people of Bradford if the minister is actually ‘restarting’ the environmental assessment, rather than simply reviewing it,” he wrote.

“I’ve visited York-Simcoe several times this year as part of the Ontario Liberal leadership race, and I can tell you the bypass remains the No. 1 issue for local voters and municipal leaders, and they deserve answers from their MPP.”

In August, Ford and Mulroney announced the plan to update EAs since legislation had changed. Then, design work would begin on the bypass to link Hwy. 400 to Hwy. 404 via a 16.2-km, four-lane highway located between Lines 8 and 9 in Bradford.

The route, first proposed almost 40 years ago, is called a critical piece of infrastructure.”

Coteau requested an update on the project and its budget and timeline.

“What is your plan?” he asked in the Legislature. “If now you are going to go all the way back to the drawing board, what does that exactly mean? How long will that take? What is the budget commitment to this project and when do you expect to deliver a plan and consult the community on this issue?”

Mulroney confirmed that the government will update the 2020 EA and then proceed with design work on the by-pass.

“As we move forward with the EA, we’ll have more to say in the future,” she said.