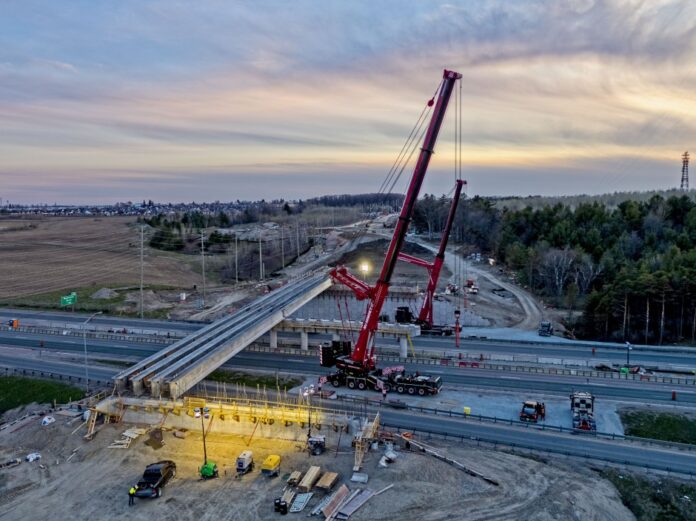 The City of Barrie has long been a divided city, split east from west by Highway 400, connected by a series of bridges over that north/south thoroughfare.

Now, following the completion of the Harvie Road bridge, the city has another connecting link, one that will support planned growth in the south end. It’s a major development, but also a significant milestone in the history of the 400.

“Our understanding is this is the first new crossing over the 400 in over 60 years. There have been newer bridges built, but they are replacements of bridges, not a new crossing,” said Andrea Miller, Barrie’s general manager of infrastructure and growth management.

That achievement came with a $76 million price tag, with the city’s share coming in at $69 million and the province’s at $7 million. The municipality was responsible for costs associated with the bridge and the road improvements on either side, with the Ministry of Transportation tending to improvements to the highway, including the replacement of the highway median, storm sewer and resurfacing the highway pavement.

The project dates back to 2015, when an Environmental Assessment took place. Project design began in 2016, with property acquisition in 2017. Construction began in 2018, and the road opened on June 24, 2021. (Click here for a virtual official opening ceremony.) 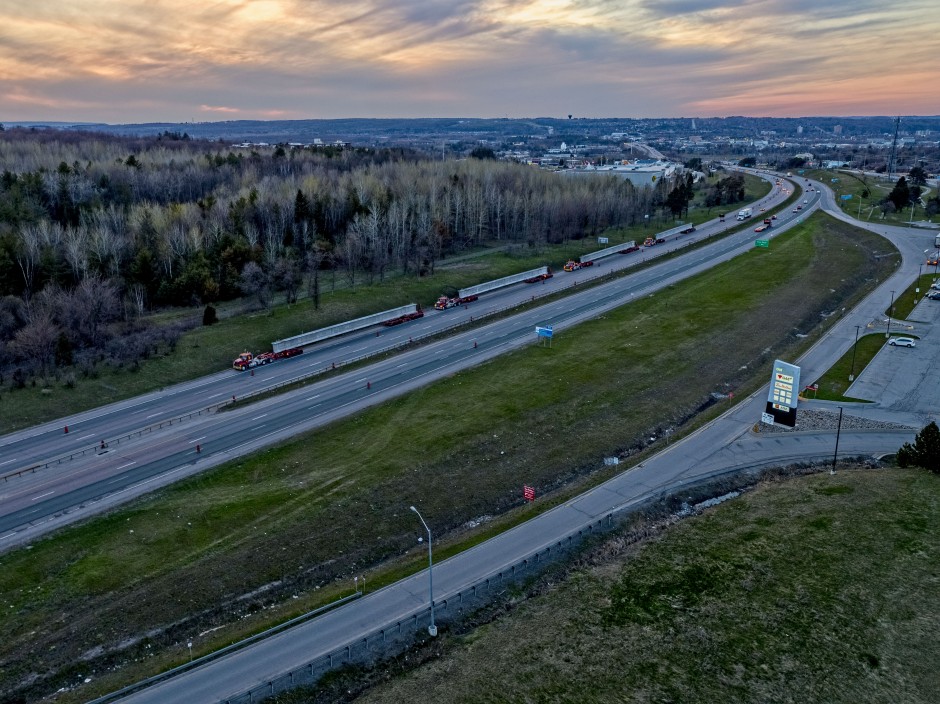 A construction kick off meeting was held with successful bidder Aecon on Sept. 18, 2018 and Aecon and their subcontractors mobilized and started working Oct 3.

Throughout several construction phases, the work zone stretched from Essa in the west to Bayview Drive in the east. The overpass has two lanes in each direction, a two-way left turning lane, sidewalks and bike lanes.

Apart from the actual crossing, the project’s features included:

Decast installed a total of 26 NU2000 girders overnight on May 12, 13 and 14. The girders are each two-metres high and about 45 metrers long – 13 spanning the northbound lanes and 13 across the southbound lanes.

“This crossing serves current and future residents by connecting Harvie and Big Bay Point roads, across Highway 400, and eases traffic congestion issues on other main arteries. It is welcome addition to the city’s south end,” she said.

“There are currently 17 proposed developments in the Ward 7 area, so as these developments materialize there will be continued pressure on transportation networks. Having this overpass in place now was part of the plan to ensure that future growth did not further exacerbate transportation challenges.”

Those projects include numerous housing and commercial developments, such as the Watersand Construction Limited proposal for 1,104 single-detached residential lots, 157 street townhouses, 241 laneway townhouses, one future commercial block, one elementary school, one neighbourhood park, and one village square.

“The bridge is another, more direct option for residents to get from southwest Barrie to southeast Barrie. The bridge has five lanes for vehicle traffic, and also supports active transportation with two separate lanes for bicycles and two sidewalks for pedestrians,” said Miller, adding that one of the first steps in the process was property acquisition, followed by:

As with any construction project of this size, successes came with challenges, and the weather was one of them, said Miller, adding there was also a lot of coordination of utilities and stakeholders.

“It is important to recognize and deal with those issues early on and throughout the process. This was a high-profile project and regular updates to council and the community were critical. As well, liaison with area residents is always something that needs full attention in a project like this.”

And while the city has not completed an analysis of the economic impact of the project, Miller said easier movement of people and goods is always a key component of a positive move for the local economy.

Soon after the Harvie Road bridge opened, the Anne Street bridge over Highway 400 was demolished on June 5 and construction of the new bridge is expected to last until November 2022. The project is spearheaded by the Ministry of Transportation (MTO), and includes and includes significant roadwork on the highway from the Dunlop Street bridge to St. Vincent Street.

That project, of course, is a replacement to an existing bridge and the new Harvie Road overpass will help solve Barrie’s growth-related issues, said Mayor Jeff Lehman.

“For years traffic congestion on Mapleview and in the fast-growing south of the city has been a problem, and this bridge is one of the solutions. One of council’s priorities was making it easier to get around the city, and this project celebrates a new way to get from east to west across the south of Barrie.”