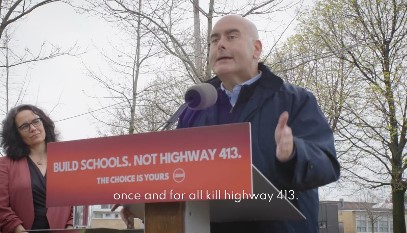 If he’s elected Premier of Ontario, Liberal Leader Steven Del Duca says his government would build and repair schools in every part of the province and pay for the plan by scrapping Highway 413.

“I’m here to announce that Ontario Liberals, if elected on June 2, will once and for all kill Highway 413 and instead, we will take those $10 billion and invest it in building 200 new schools across Ontario and repairing 4,500 other schools,” Del Duca said at a press conference outside a school.

“This is as clear a choice as you can find in this election campaign.”

“I’ve heard the stories about schools in this province of ours where the windows in the classrooms don’t open and close properly, where the ventilation systems are so outdated that it’s embarrassing, where in sweltering heat, there is no relief, when in bitter cold, there is no relief,” he said in announcing the plan Wednesday as the election campaign began.

The Liberals say their capital schools plan would include renovations to ensure new ventilation systems in every school that needs them.

Del Duca says they will spend $10 billion to be spent over five or six years, and it would be in addition to $14 billion over 10 years that has already been budgeted.

The school repair backlog has been pegged in recent years around $16 billion, a number that the NDP largely blames on previous Liberal governments.

“No matter what the Liberals say now, they had 15 years to address our crumbling schools and they didn’t,” NDP Leader Andrea Horwath said.

“They left this province with $15.9 billion of school repair backlogs, so I don’t know how anybody can trust what they say now when for 15 years, they didn’t prioritize … the quality of repair of our kids’ schools.”

“The backlog of repairs … tripled under the Liberals,” Ford said. “All he does is talk and talk, wants to set up all these committees and studies. We’re building $14 billion of new schools. We’re catching up on the backlog of good state of repair.”

Del Duca said if the Liberals form government after this election, “we will not be closing any schools.”