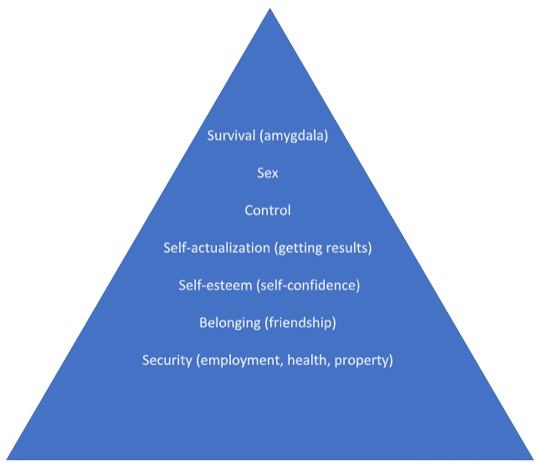 If I say: “chaos theory,” or “temperament,” or “need priorities,” or “amygdala,” what images do they conjure in your mind, especially as they apply to your business? Probably not much of anything. And if I say that these four concepts are fundamental to the success of your enterprise, are you thinking I have exceeded all hyperbolic limits? Well, I will state unequivocally that these four keys hold the passage to success in every human endeavour. The sooner you investigate them, the better.

Ignore at your peril

If you ignore chaos theory, you will miss opportunities to build and miss chances that simply lie before you. If you ignore temperament, anticipate high staff turnover, staff conflicts, and work poorly done.

If you ignore human need priorities, you will miss leading your staff to increased productivity levels that would otherwise be at your disposal. If you ignore the action of the amygdala, you will fail to tolerate people’s misbehaviour and not be able to get out of them what you could.

Which of these can you afford to ignore?

Over the past 20 years, the 214 monthly newsletters of CCCC have been rife with references to “chaos theory,” “temperament,” “need priorities,” and “amygdala.” Now, I have created the challenge in this newsletter #215 to explain each briefly, how ignoring them will mess up your businesses on an almost daily basis, and how to introduce them, painlessly, into your company.
(1) Chaos theory is a concept that describes how the universe and inert chemicals evolved to form humankind at its current remarkable level. The nine principles of “chaos” limit a clear explanation here, but the one principle that can be explained briefly is that as you tackle an issue, you do not have to know the answer before you leap; instead, you build on what exists already and move forward from there. Humans are built from apes, are built from ground animals, are built from the lowly amoeba.

Our applying chaos theory at a subsidiary of CCCC to help people find jobs resulted in over 200 jobless individuals finding what they described as an “ideal” job in an average time of 13.6 weeks vs. the national average of 39 weeks. And it always resulted in, not just a job, but a much better job than before – and more money.

Using chaos theory to problem-solve has enabled CCCC to assist more than 100 companies to resolve thousands of problems “every time” and with elegant solutions that usually impress everyone involved.

A finer detail that explains its name, “chaos,” is that the state of “chaos” in any endeavour is one of four stages; chaos is not just chaos, but rather, a predictable state.

(2) Temperament says that people fall into a mix of four behaviours, namely: (a) aggressiveness (including impatience), (b) carefulness (including thoroughness), (c) advancing forward (including risk-taking), and (d) passivity (including human kindness). Each of us has pieces of all four temperaments, but most of us are strong in two and weak in the other two. Usually, an aggressive person does not understand a passive person; a risk-taker fails to appreciate the very cautious person – and vice versa.

When the personal temperaments are understood, one can hire the right person for the right job and keep them employed for decades, reducing staff turnover to almost nil. A company can have its employees understand those people are different from themselves and they will realize that no task can reach successful completion without the application of all four. “I need that other guy that I used to hate.”

(3) Need Priorities of humans, first outlined by Maslow in 1943, has been toyed with, by our observations, to list the order of how humans will react to situations. Survival and Procreation (sex) are #1 and #2, respectively. For example, if, while meeting a need for sex (procreation), you are confronted by a threat (say, a live hand grenade), sex will be overridden by the higher need to survive. “Control” comes in at a strong #3, as noted on the chart that follows. Everyone wants control over their own situation and only sex and survival are more important. When control is not allowed, people sulk, overreact, and reduce their cooperation significantly – children, adults, and seniors. People who have control over their own situations are not only happier, but more productive.

(4) Amygdala You will have noticed that at the very top of the chart lies our need for survival. The two amygdala glands in our brains equip us to fully respond to any threat very quickly so that we can live another day. They provide the fight or flight response. For most humans, fight comes first. That is, when aroused we tend to fight back (at least get angry), and all logic goes out the window. To equip us for the fight, the pair of amygdalae initiates forty-five physiological changes to our body almost instantaneously so that we can immediately take on the challenge.

How ignoring them in the business environment messes things up

(1) If you do not apply chaos theory, your tasks will take longer, cost more, and may never provide the answers you seek. The imperatives of chaos offer not only a speedier way to get to a workable answer; they ALWAYS offer a more elegant answer.

(2) If you ignore temperament, you will make hiring mistakes; you will fail to group the right mix of people for teamwork issues; you will assign the wrong kind of work to the wrong people – all of which restrict productivity and may lead to a poor mood in the office.
(3) If you fail to understand that control sits very near the top of the needs priority chart (after the basics of survival and sex), you will miss giving sufficient control to staff people, which will make them less cooperative, less productive, and moody. Micromanaging is an example of failure to adequately give control, but such failure rears its head in many other ways, such as not taking the risk to trust when assigning work, and failure to share corporate information.
(4) Your inability to grasp the major, often involuntary, role that the amygdalae play will trigger your own amygdalae to be unreasonable with employees when they misbehave. You will have trouble grasping that calmness and cool-headedness will win the day. Decisions throughout such an “ignorant” company will more often be emotional rather than logical, creating all kinds of unnecessary disruptions.

How anyone can begin to implement the keys

(1) Under your own control you can take advantage of chaos theory in several ways. One way is to muster action even when you don’t know where you’re going, and trust that you will progress. Another way, when confronted with an issue, is to gather as much information as possible by having a group of interested people list significant and insignificant facts and observations related to the issue.

Let that chaotic information in front of you allow you to build on what lies before you – to tell you where the next step will be: If there is a lot of financial information, create a financial bucket and put those ideas in it; if there is a lot of branch-location references, create a branch-location bucket and put those ideas in it, and so on. Then set about to solve the issues in the financial bucket. When that is done, go onto your branch-location bucket. If solutions are not forthcoming, break the buckets into sub-buckets.
(2) Fortunately, temperament is a well-established business practice. You can buy temperament testing forms and services from Myers Briggs, DiSC, CCCC, and so on. Learn the characteristics of each of the four temperaments. Set about slowly to match job type to personnel type – as much as practical

Your staff can help you; most people will know which jobs they hate. Almost immediately upon implementation, you will see happier (and more productive) staff.

(3) Stop fearing your staff; they are not misbehaving children. Share your financial data with staff. Instead of telling them what to do, ask them what they feel they are supposed to do. Instead of setting staff members’ goals, ask staff to set their own goals. Instead of planning in the upper staff area only, get everyone involved. When giving an assignment to an employee, let that individual do it his or her way. That is, pass more control on to regular individuals.

(4) Learn to defuse your own emotions first, and then your protagonist’s emotions. Do not allow the amygdalae to take over your enterprise. Instead of biased single-person decisions, always get a second person involved in decision-making (including your own decisions). When confronted with an angry employee or supplier or client: First, cast away all your ill-feelings about insults received and the protagonist’s irrational behavior. Second, take steps to defuse his or her emotions.

Show empathy: “I’m sorry that you are upset.” Do not defend or justify your position because it makes the protagonist think you are not listening. Third, when the other person is calmer, begin to solve the problem by asking him or her to indicate solutions; you will write them all down (without argument) and say you will get back tomorrow to report how your team will address these. (Unreasonable ones you will not address, of course.)

There they are: chaos, temperament, control, and, emotions (amygdalae) – four little word ideas that you MUST master if you want to grow and fulfill your dreams.

1 More details can be found for each of these topics in past newsletters of CCCC. Also, a book by this author, anticipated to hit the newsstands later this year, “77 Ideas (on how to run your business)” covers each of the four topic in chapters 8, 10, 13 and 25.