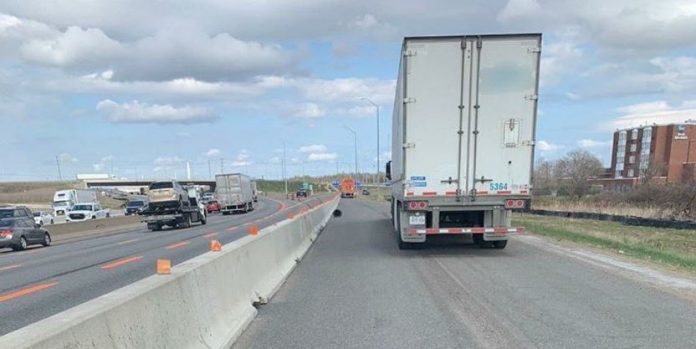 The most recent incident, in which police say a truck driver drove on the wrong side of the construction barrier wall in an active construction zone with workers present, occurred Friday May 8 on Highway 401 near Regional Road 25.

Both men have been charged with “careless driving,” police stated on Twitter.

These incidents come as OPP are reporting an increase in aggressive driving and speeding due to less-travelled and more open roads during the COVID-19 pandemic.

A 19-year-old driver was clocked at 207 km/h and charged with stunt driving on Highway 403 Sunday afternoon, OPP reported.

That followed another 19-year-old driver being charged with stunt driving and dangerous driving on Saturday night, reportedly driving 308 km/h on the QEW through Burlington. He was driving his father’s Mercedes, police said.

“Unbelievable speed. We are talking 85-metres a second – 208-feet a second,” Schmidt said. “This is absolutely egregious for anyone to be going that speed.”

“Can you imagine a car going by you at 308 kilometres an hour? This is the fastest speed I have ever heard of.”

Canada Road Safety Week runs May 15 to May 21 this year, part of a national campaign to make Canada’s roads “the safest in the world” for drivers, cyclists, pedestrians and construction workers. Across the country, police will be out in force targeting high-risk driving behaviours, including distracted driving and speeding.

Schmidt says OPP on Toronto-area highways have charged about 150 people with street racing since the first of May, putting construction crews and other drivers at risk.

“There’s construction in many of these areas,” he said. “Aggressive driving, speeding . . . if something was to happen, you hit a pot hole or you have to make a quick steering maneuver or a quick lane change . . . you may not be able to do it.”

Cities across Ontario are reminding motorists to exercise caution in construction zones by slowing down as work ramps up in the spring. With reduced traffic volumes due to COVID-19 restrictions, many road projects across the province are progressing quicker than usual.

In Toronto, traffic volume is down between 45 and 65 per cent and the city has accelerated “as many important construction projects as possible” along with maintenance work to renew aging transportation and water infrastructure and some facilities.

Ontario laws double speeding fines in construction zones when workers are present. In addition to any speeding violation the total payable fine for disobeying a road closed sign is $110 and upon conviction, two demerit points.