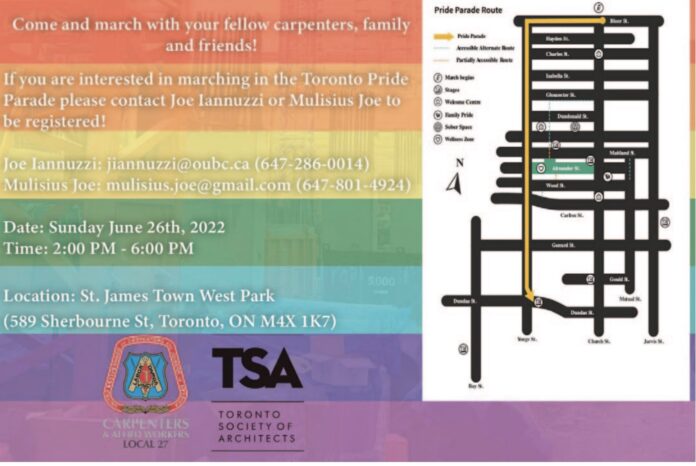 Members of the Toronto local of the United Brotherhood of Carpenters and Joiners in partnership with the Toronto Society of Architects (TSA) will march in solidarity with the LGBTQ community in Sunday’s 2022 Toronto Pride Parade.

“I’m very proud and excited about the direction of my union,” said Chris Campbell, the Carpenters’ District Council of Ontario Director of Equity, Diversity and Inclusion. “Our membership reflects the diversity of the cities and towns of Ontario,” he added, noting that the Carpenters’ Union is evolving and building bridges with all communities including the LGBTQ community.

“Our members have volunteered over the years to build many Pride floats for various groups, but this is the first time ever we are marching in the Pride Parade openly.”
Campbell said Carpenters’ Local 27, UBCJ Drywall Local 675 along with representatives from other unionized construction trades are expected to take part in the march.

He said the Carpenters group will be led by Carpenters’ Union member Mulisius Joe who is among those who have shown pride in their identities in a construction industry that can present challenges for members of the LGBTQ community.

Joe is a concrete form worker and veteran member of Local 27, which has more than 8,600 members in the Toronto area and is one of 16 locals across Ontario affiliated with the Carpenters’ District Council.

Joe said about 80 Local 27 members, family and friends have signed up and those not registered but who would like to join can email their name and T-shirt size to mulisius.joe@gmail.com. The group will be meeting at St. James Town West Park.

“We are excited to be marching at Pride,” the Toronto Society of Architects added in a statement, noting that 100 spots are available for TSA members, families, friends and colleagues. TSA marchers will carry silhouette signs of notable LGBTQ buildings and other spaces in Toronto’s history such as the Letros Tavern on King Street, one of the earliest venues in the city to host drag events.

“For 2022 we are also proud to be joined by the Carpenters Union as we work together to make a more inclusive and welcoming architecture and construction industry,” the TSA added.

“Things are changing,” Campbell said. “It’s no longer enough to say we are in support or stand in solidarity from a distance. We as industry leaders cannot change the past. We as construction trade unions leaders can speak up and work on being more inclusive going forward.

“This can be done through training and educating our members. Another step is to adjust our processes, policies, collective agreements, bylaws and constitutions with more supportive language against homophobia.”

A number of other unions including the United Food and Commercial Workers Union, CUPE and the Steelworkers are taking part in the in-person return of the festival events and parades or have issued statements in support of Pride and its message of inclusion.

Sunday’s parade in Toronto is set to be one of the largest ever, organizers say, featuring more than 300 registered organizations and 35,000 expected marchers.