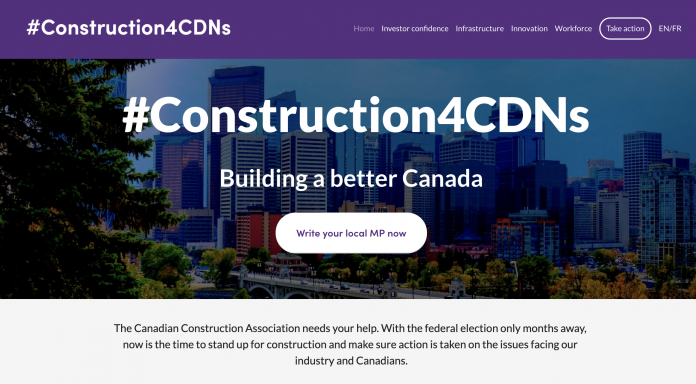 The Canadian Construction Association (CCA) has set up an election advocacy website at  construction4cdns.ca, giving construction industry participants a tool to communicate with their Members of Parliament the important issues affecting the industry.
“With the federal election only a few months away, now is the time to stand up for construction and make sure action is taken on the issues facing our industry as we work to build a better Canada,” CCA president Mary Van Buren said in a memo introducing the site and its tool to generate pre-written letters that are signed by individual constituents.

“This website is designed to advocate our issues directly to government by empowering members, staff, friends or family to easily send a pre-written letter to their local member of parliament (MP), and later in the summer, to their election candidates,” she said.
CCA’s campaign #Construction4CDNs, and its associated website construction4cdns.ca, champion four main issues of national importance for the construction industry. They are:

It took less than three minutes from setting the link to sending the letter. The one the system generated for Ontario Construction News interim editor Mark Buckshon is below.

(The system prompts users to provide their home addresses, and then selects the appropriate MP. For privacy reasons, I’ve removed my home address from this story.)

As a constituent in your riding, I am proud to work in the construction industry and of the contribution I am making to building a better Canada. The $180 billion the Government of Canada is investing in infrastructure is a wise strategy – one that can ensure Canada remains one of the best places to live, work and invest in the world.

I am writing you today to express my deep concern about several issues that are currently impacting the construction industry’s ability to deliver more benefits to Canadians. Eroding investor confidence, inconsistent infrastructure spending, workforce shortages and limited incentives to innovate due to the framework of project proposals are all areas that are preventing stronger growth of the industry.

Construction is the backbone of the Canadian economy. Today, the sector accounts for $141 billion in economic activity annually, or 7 per cent of Canada’s GDP, and employs close to 1.5 million Canadians. In the decade ahead, the Canadian construction market is poised to become one of the top 10 largest in the world, driven primarily by the global demand for natural resources and the urgent need to modernize the country’s aging public infrastructure. Leveraging this opportunity could create multiple jobs and generate a substantial boost to the economy.

This growth can only be realized however with the right policy framework.

First, investor confidence in Canada continues to be a major concern for the construction industry. International and national businesses continue to have projects in regulatory limbo, preventing them from investing their significant financial resources and potentially chilling the interest of others. Furthermore, new policies such as carbon pricing and community benefits must take into account the need for Canada to remain competitive in the global economy. Canada must remain a go-to place for corporations to invest in a variety of different types of projects – from bridges and highways to pipelines and water treatment plants. Policies proposed in legislation like Bill C-344 and Bill C-69 need to be reconsidered to preserve the integrity and fairness of the competitive bid system, as well as strengthen investor confidence.

Second, infrastructure spending must be more consistent for the construction industry to grow with confidence. Continued sways in the funding of projects cause inefficiencies across the system and contribute to escalating labour costs, followed by layoffs. This situation makes it difficult for the industry to retain apprentices, invest in innovation, or even stay afloat during lean years. This can be addressed by developing a 25-year plan, with a consistent and transparent yearly allocation of infrastructure funding.

Third, the construction industry, like others, is facing a serious workforce shortage as we brace for about 21 per cent of workers retiring in the next decade. The government has an opportunity to work with industry on re-positioning the image of construction as an inclusive sector with a choice of many rewarding careers. I urge you to work with the CCA to develop a strategy to recruit, retain and re-train a diverse, skilled and tech-savvy workforce in order to keep this important economic sector healthy and competitive.

Fourth, the industry is adopting new technology, like drones, artificial intelligence and new materials, yet we still lag behind other industrialized countries in productivity, innovation and technology. The Canadian government can accelerate progress by earmarking funding to support this area, as well as leveraging Canada’s Infrastructure Bank to structure deals that allow for innovation, without adding this cost to the owner or the contractor. Incentives and support for CCA’s request to fund co-op placements will impact and strengthen the industry’s capacity.

The upcoming election is an opportunity for your party to take a firm stance in supporting the construction industry. As your constituent, I ask that you take a pledge to support us by taking positions on the issues above. Canada’s strength as a nation is linked to construction. The industry provides jobs, injects socioeconomic opportunities and life into a community, and creates infrastructure critical to keeping the country moving forward.

I hope we can count on your support in building a better Canada.

In her memo, Van Buren asks industry supporters to “please forward this message to your colleagues, friends and family who care about investing in Canada’s future. There is strength in numbers and the more letters received; the more our voice is heard. Help spread the message by sharing when you’ve sent your letter using the campaign hashtag #Construction4CDNs.” 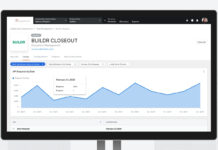