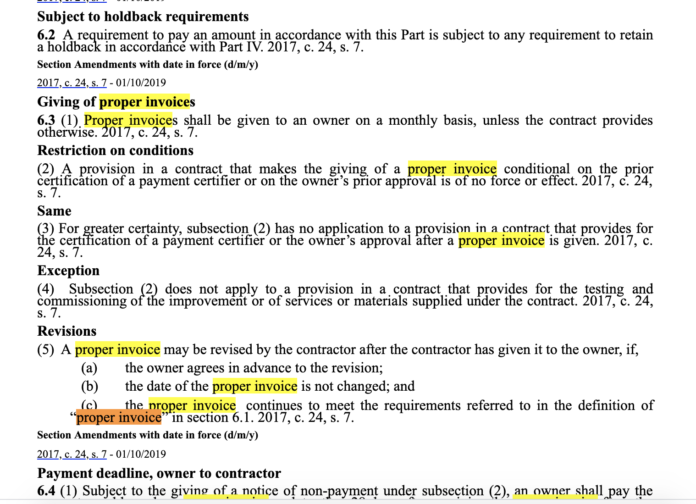 This is the first article of what will probably be a series of columns regarding problems arising from the implementation of the new Act.

Many of these issues were not unexpected, for that very reason the crafters of the Act, along with the Attorney General at that time, agreed that it needed to be a living document that could be updated easily once it came into effect, as they recognized that this was a massive change in how we conduct business and it was quite likely they might not have got it perfect the first time out.

Since its implementation, many organizations have identified several issues and future columns will touch on some of these. The good news is that these associations have come together and are working together to reach out to the new government and the new Attorney General in hopes of having these issues rectified to ensure that the Act works more effectively for everybody concerned.

The first thing I would like to address is the 28-day wait period for issuing payment as there does seem to be some confusion as to when that timeline starts. The Ontario General Contractors Association (OGCA) created two very useful guidebooks that are free to anybody who wishes to understand the process.

Under Part 1.1 Prompt Payment, a “proper invoice” is defined in  6.1.1 This is information that must be included and what industry professionals need to pay attention to is 6.1.7 “Any other information that may be prescribed.” That allows owners or buyers of construction to insert other conditions that need to be met for a proper invoice to move forward.

This is where some of the problems are occurring as some owners have attempted to put in restrictive requirements, and in some cases overly rigorous conditions for a Proper Invoice to move forward.

The guides to which I previously referred provide recommended best practices to ensure the smooth process of submitting these invoices. Nonetheless, we have seen attempts to complicate the process and regurgitate information that was already available in the previous tender submission, or in the contract, for which there is absolutely no need.

We have seen attempts to insert a condition that the owner must approve the submission prior to it moving forward. This is where those provisions run afoul of the Act, if you refer to section 6.3 (2) of the Act it clearly states, “A provision in a contract that makes the giving of a proper invoice conditional on the prior certification of a payment certifier or on the owner’s prior approval is of no force or effect.”

Therefore, any clause that requires the owner to issue some form of formal acknowledgement of the progress draw or a milestone for payment in our opinion contravenes the Act. Part 6.3 (2) strictly prohibits any such process for prior certification of the certifier or the owner.

Contractors and sub-trades and suppliers should make sure they are paying close attention to contracts and tenders when they are put out and to the conditions that are being implemented for the submission of a Proper Invoice. Those conditions could delay the timing of when an invoice is submitted, and this brings us back to the original point – until the proper invoice is submitted the 28-days does not begin to run.

Clive Thurston is the OGCA’s former president. He is not a lawyer. His observations here are based on his experience, and they should not be considered as legal advice.