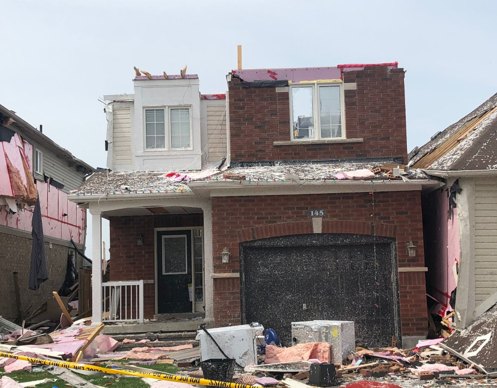 Four months after a tornado caused more than $100 million in damage to a Barrie neighbourhood, city council is calling on the province to change the Ontario Building Code to make hurricane strips mandatory on all new residential construction.

Councillor Natalie Harris, who was in the basement of a house that had the roof ripped off by th tornado, is also asking municipal staff to develop a rebate program for hurricane straps including resource requirements and a proposed funding source.

The rebate program would be voluntary since the city cannot mandate hurricane straps outside the Ontario Building Code.

“I think really what they need to do is change the building code so that’ll force the developers to put the straps in because they are extremely inexpensive to install,” said Councillor Harvey. “Even if they were just to designate certain areas of the province that are prone to these heavier storms at least that’s a starting point.

“I think this is something that the province should be looking at this.”

Dufferin has partnered with the Institute for Catastrophic Loss Reduction (ICLR) and provides a $4.50 rebate for every hurricane strap installed on new builds. Dufferin County pays $3 and the ICLR pays $1.50.

“I guess the other piece that I’m really concerned about is because this is predominantly going to be affected in the new builds, most of the new builds are not going to be Barrie people,” said Councillor Gary Harvey. “It’s going to be a lot of people from other areas, GTA and things, and it’ll be the current tax base funds that are going to be used to subsidize this program.”

Staff was directed to partner with the Institute for Catastrophic Loss Reduction to: a) Propose to the Ontario Government specific measures to modernize the Ontario Building Code with respect to severe wind protection for new homes, including the requirement for the use of straps, clips or other mechanisms to better connect the roof, wall and foundation of homes.

“Building with hurricane clips (or something similar) will make buildings stronger, but not necessarily strong enough to resist tornado induced loads. Hurricane clips deal with one weak link in the framing system, but do not create a continuous load path to resist the applied loads,” staff wrote in an August report to council.

“Discussion on this topic needs to be comprehensive to ensure modifications made achieve the expected results. While hurricane clips (used in addition to the regular connection techniques) will make buildings stronger, to suggest their use alone will eliminate the damage seen during the recent tornado may set an unrealistic expectation of how these buildings will perform in the future.”

Several councillors, however, are concerned about the potential $300,000 annual price tag for the program – based on expected growth and an existing rebate program in Dufferin County.

Environment Canada said the tornado that tore through Barrie was a category EF-2 with a maximum wind speed of 210 km/h.

City staff has been working with homeowners and the Municipal Property Assessment Corporation (MPAC) to inspect damage and reassess property values. MPAC will be inspecting approximately 70 properties, according to a staff report.