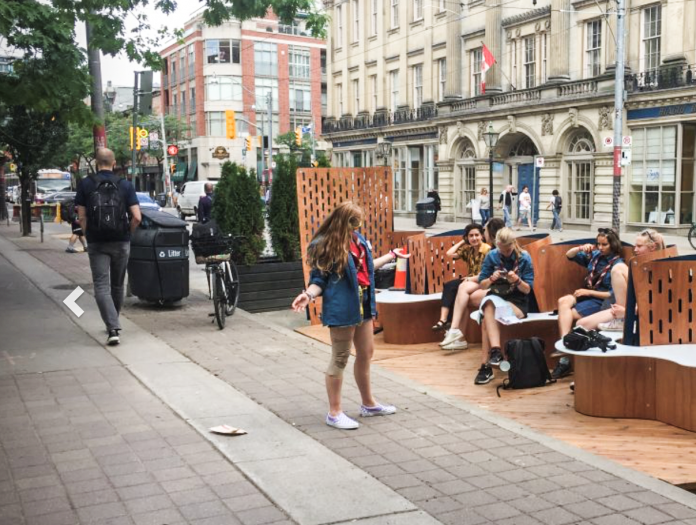 Putting transit and people first was the priority of the City of Toronto’s King Street Transit Priority Corridor pilot program, which aimed to improve how transit would work along the route.

Adding to that 2017 people-first vision was a program to install public spaces, or temporary parklets, along King Street, to encourage pedestrian traffic and engagement. The City began adding the parklets, 30 of them in 2018, in a move to bring more people downtown.

Merchants had complained that the King Street pilot project, a pilot that prioritized transit over private vehicles, was detrimental to business. In a press release, the City had said the pedestrian-friendly spaces would add “to the vibrancy of the street.” The expectation was that most would remain for the duration of the pilot program, which was to have been temporary. However a staff report released last April recommends making transit strategy permanent.

“King Street is a significant east-west corridor in the Downtown, serving the largest concentration of jobs in the entire country. The neighbourhoods along King Street have experienced tremendous growth in the past ten years, and will continue to grow in the future,” reads the report.

“King Street is also a key destination for culture, heritage, entertainment, and retail. The 504 King streetcar is the busiest surface transit corridor in the entire city and now moves more than 84,000 riders on an average weekday.”

The report identified a number of beneficial transit results, including:

The report also shows that vehicle traffic has been significantly reduced on King Street, more people are cycling, and there are more spaces for people to extend their visits to King Street.

“Forty-five unique amenities were introduced across 18 new public realm spaces in the curb lane, including cafés, art installations, public seating areas, and parklets. These spaces created opportunities for people to linger, and provided extra space for pedestrians to walk when sidewalks are crowded. Public realm interventions and programs were undertaken to help activate and animate King Street during the pilot, reinforcing King Street’s vibrancy as a major cultural and entertainment destination,” reads the report.

More parklets are coming in 2020, with the City now seeking concept proposals for temporary parklets for the King Street Transit Priority Corridor. Submissions are due on Feb. 5, by noon. Winning bids will be notified no later than Feb. 14, with installation scheduled for May 15, and removal by Dec. 31.