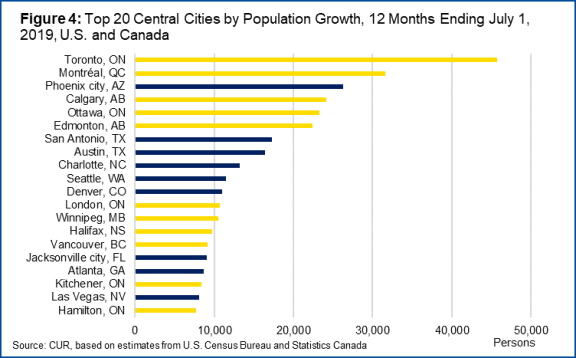 A recent report by Ryerson University’s Centre for Urban Research and Land Development revealed that Toronto overtook Dallas-Fort With Arlington for the top spot.

“I’m incredibly proud of the growth we saw in the City of Toronto again last year, as one of the most livable and diverse cities around the world,” Toronto Mayor John Tory said in the release.

“Toronto is Canada’s economic engine – home to residents with incredible talent and innovative businesses. The steady increase in population helps fuel the economy and will be an important part of our recovery efforts as we emerge from this pandemic absolutely determined for our city to come back stronger than ever.”

Research shows Toronto’s strong position before the global COVID-19 pandemic and will motivate the City to continue that success through the restart and recovery period, the report concludes.

Construction, a key indicator of economic vitality, is booming in Toronto. The city is also benefiting from a surge of investment in public infrastructure and transit to meet the needs of this rapidly expanding region.

In the past 40 years, Toronto’s downtown population more than doubled and in excess of one-third of all jobs in the city are now within the core.

Toronto region is home to more than 6.47 million people with a diverse population where nearly 50 per cent of people are born outside of Canada.

According to a press release from the city, Toronto’s globally-connected residents are the driving force behind its economic prosperity and innovation.

The report shows Toronto is competitive in almost every major business sector from technology and life sciences to green energy; from fashion and design to food and beverage; from film and television production to music and digital media.