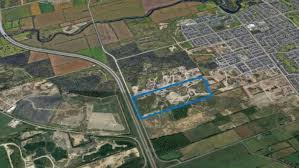 The City’s Planning Committee today approved rezoning for a new subdivision on lands formerly occupied by the Brazeau sand and gravel pit, on the edge of the urban boundary.

Caivan plans to build The Ridge – a 500-home development, on property that has been the Brazeau Pit on the edge of Barrhaven for the past several decades. City and provincial policies protect valuable sand, gravel and rock, barring development on them until the materials are all extracted.

City and provincial policies protect valuable sand, gravel and rock, barring development on them until the materials are all extracted, meaning the subdivision can’t happen until the mining licence for the property is formally retired by the Ontario government..

Originally, city planners stated the Ministry of Natural Resources and Forestry had “confirmed aggregate resources on the site have been exhausted,” but CBC reported it had made no such statement, according to a ministry spokesperson.

The committee agreed last week to change the wording to say the ministry had “confirmed that the pit licence surrender process has been initiated.”

The new de elopement will rehabilitate the former pit, into a mix of detached homes and townhouses. The next step in the approval process is for the Government of Ontario to consider an application regarding the status of the active pit operation license for the site.

The process set out by the Ministry of Natural Resources and Forestry requires the City to approve the zoning from mineral extraction to residential. After the Province surrenders its license, the City must finalize subdivision registration before construction can begin.

The Committee also approved zoning for an increase in permitted height for two properties on Solandt Road, in the Kanata North Business Park. The amendment would increase height from 22 metres to 44 metres, to allow for a proposed eight-storey office building.

Council is expected to approve the rezoning at a meeting Feb. 26.