More than three million Canadians have lost their jobs due to COVID-19 since March 15 – bringing the unemployment rate to its highest level in nearly 40 years.

A Labour Force Survey published by Statistics Canada on May 8 shows that two million more Canadians declared they were out of work in April, an increase from one million in March.

Also, Statistics Canada reported the number of people who were employed but worked less than half of their usual hours was over 2.5 million. 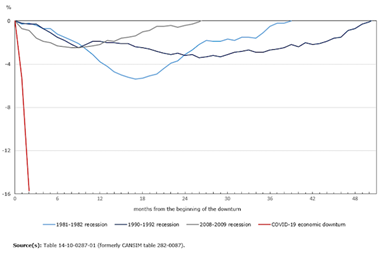 The magnitude of the decline in employment since February (-15.7%) far exceeds declines observed in previous labour market downturns. For example, the 1981-1982 recession resulted in a total employment decline of 612,000 (-5.4%) over approximately 17 months.

The April unemployment rate would be 17.8 per cent, when adjusted to reflect those who were not counted as unemployed for reasons specific to the COVID-19 economic shutdown. During the week of April 12, 1.1 million people were not in the labour force but had worked recently (in March or April) and wanted to work. They were not counted as unemployed, but were counted as not in the labour force because they did not look for work, presumably due to ongoing business closures and very limited opportunities to find new work.

In April, almost all (97.0%) of the newly-unemployed were on temporary layoff (not seasonally adjusted), indicating that they expected to return to their former employer as the shutdown is relaxed.

COVID-19 impacted every province, with double-digit percentage drops recorded in every region of the country. Quebec hit nearly 19 percent, or more than 820,000 jobs lost.