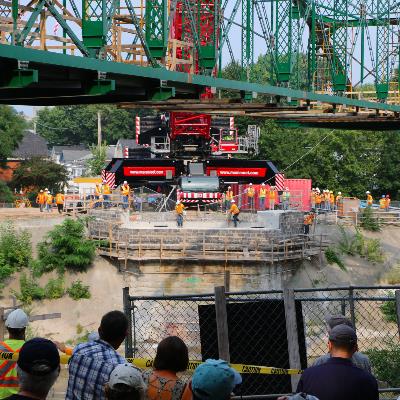 Dillon Consulting Limited and the City of London picked up the 2020 Willis Chipman Award for the rehabilitation of the historic Blackfriars Bridge – top honours from the Consulting Engineers of Ontario. The award was presented at the 18th Annual Ontario Consulting Engineer Awards (OCEA) virtual gala on May 1.

The Willis Chipman Award, named after the first engineer in Canada who pioneered the industry in Ontario, grants the highest honour. It is awarded to the project that best demonstrates the value and importance of consulting engineering plays to improve the economic, social and environmental quality of life in Ontario.

“We would like to express our gratitude for the privilege of working on this project with the City of London as well as recognize the very cooperative and effective work by the general contractor for the construction phase of the project, Mclean-Taylor Construction,” said in a press release.

Constructed in 1875, Blackfriars Bridge is one of the oldest surviving wrought-iron bowstring arch-truss bridges in North America. The City of London retained Dillon to help address the challenge of rehabilitating this heritage bridge to give added strength while preserving aesthetic character.

“We would like to express our gratitude for the privilege of working on this project with the City of London as well as recognize the very cooperative and effective work by the general contractor for the construction phase of the project, Mclean-Taylor Construction,” Dillon representatives wrote in a press release.

“This project represented almost a decade of effort on the part of engineers, planners, and scientists, drawing from some of our offices in four time zones across Canada. Rehabilitation of heritage bridges requires a lot of collaboration, innovation and troubleshooting during the construction phase between the owner, engineer, and contractor, and this project benefited from a great working relationship.”

The rehabilitation of Blackfriars Bridge has renewed the iconic structure for new generations to enjoy, while providing a functional and enhanced component to the transportation network in the downtown.

“The bridge has not only met the future needs of the City, it has become an integral part of the community identity, a gateway to our past, and a part of the shared heritage of all Ontarians.” Click here to read more.

The following awards were also presented at the virtual gala: