Ottawa developer Golpro Holdings plans to build a massive high-rise complex at Baseline Road and Clyde Avenue, currently the site of a small strip mall with a Burger King restaurant, corner store and other services.

The 468-unit, two-tower project would be built at 1356 Clyde Ave. Roderick Lahey Architects is designing the project, to be constructed in two phases.

The development is spurred by transit plans, with expected bus rapid transit lanes on Baseline and a station at Clyde.

Documents filed with the city’s planning department show that Golpro visualizes towers at 24 and 28 storeys. These structures would be at least twice the height of neighbouring buildings along the east-west corridor Baseline Road.

The Ottawa Citizen reports that the Baseline and Clyde area is the site of other potential developments. A proposed 15-storey residential complex is planned for the land across the street. Meanwhile, Dymon Storage wants to build a self-service warehouse diagonally across the intersection, but city council has rejected a zoning application for that proposed project.

The planning documents show that Golpro’s project would have commercial space on the ground floor and the developer hopes to keep some of the plaza’s current tenants.

City council will need to approve the heights since current zoning allows buildings only to 9 metres high, while the proposed buildings are much taller – 74.5 metres and 86.5 metres respectively. 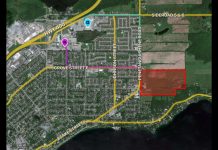