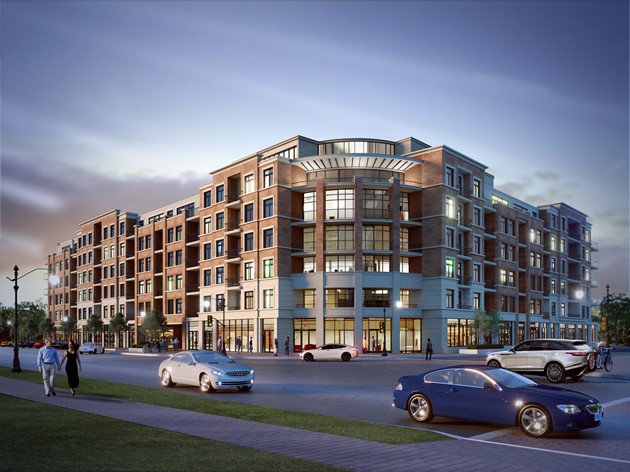 Town council is expected to review the project on July 22, after discussions at Collngwood’s Development and Operations Services Sanding Committee this week.

The six storey building, called Monaco, will have a 31,398 sq. ft. footprint, with a partial seventh story housing amenities.

Collingwood planner Trevor Houghton reports that the building will include about 11,517 sq. ft. of commercial space on the first floor. There will be 127 residential units on the remaining five floors, with an exercise  (1,485 sq. ft.) and recreation room (1,938 sq. ft.) along with an outdoor area and a mechanical penthouse on the seventh floor.

A former school on the site was demolished in the early 2000s. Later in the decade, Admiral Collingwood Development Corporation (ACDC) negotiated a site plan control agreement at the Ontario Municipal Board for a five storey building.

The original developer ultimately didn’t build anything on the site, but Stonebrook revised the plans and proposed Monaco in 2017.

Collingwood Today reports that other agreements the town is requiring of the Monaco developers include:

The town’s planning staff say the proposed development conforms to the official plan, zoning bylaw, and heritage district bylaw, and so support the proposal.