Dream Impact Trust and Dream Asset Management Corp. (DAM) have taken full control of the 34-acre Zibi redevelopment along the Ottawa river in Ottawa and Gatineau after acquiring shares of Theia Partners, including Ottawa contractor and developer Jeff Westeinde.

The trust reported the news in its second quarterly report. Real Estate News Exchange (RENX) reports that the Dream team will share ownership on a 50/50 basis, and the purchase was settled with a cash payment of $9.1 million and a promissory note for $5.5 million.

Weistende will continue as Zibi Canada president after the transaction.

“My role is largely unchanged,” Westeinde told RENX. “Theia continues to work with its partners at Zibi on high-level strategy onsite, leading the sustainability file and community engagement.”

Westeinde said that, for Zibi’s syndicate of investors, the long-term plan has always been for it to become an income-generating development. Serving as an asset management firm is much more in Dream’s wheelhouse than it is for Theia.

“Now is as good a time as any,” he said. “My confidence in the team at Dream to continue to take Zibi in the right direction is huge.”

Zibi is scheduled to be completed in 2032 – but RENX quoted Dream Office REIT COO Gordon Wadley as saying: “We are not holding ourselves to that. We want to do it right.”

Zibi is a complex development involving shoreline and islands in two provinces and on two cities, on land sacred to Algonquin First Nations. The National Capital Commission is also a stakeholder. 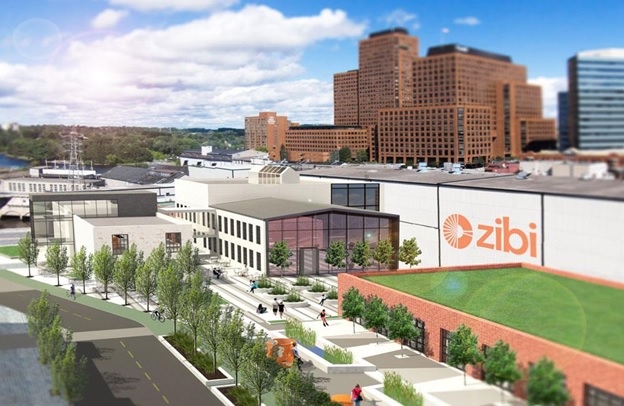 “Zibi goes way beyond bricks-and-mortar development,” Wadley was quoted as saying. “Sustainability, climate resilience and social equality have never been more front and centre at the forefront of society. These have always been our key pillars.”

The Canada Mortgage and Housing Corp. (CHMC) announced in July a $70-million investment for Zibi, most of which ($60 million) will be used to construct Zibi Block 10. This 15-storey building will provide Gatineau with 162 new units of rental housing.

“The ZCU relies on post-industrial waste energy for heating, and the Ottawa River for cooling. So, Zibi will not only include affordable housing, but also, affordable housing that sets a new standard for sustainability and carbon reduction,” the published report says.

Zibi expects six of its 44 planned buildings, including both commercial and residential space, to be occupied by the end of this year. The federal government is the anchor tenant of an eight-storey, 158,000 sq. ft. building on East Chaudiere Island.

RENX reports that other buildings currently under development and predevelopment within Zibi include: