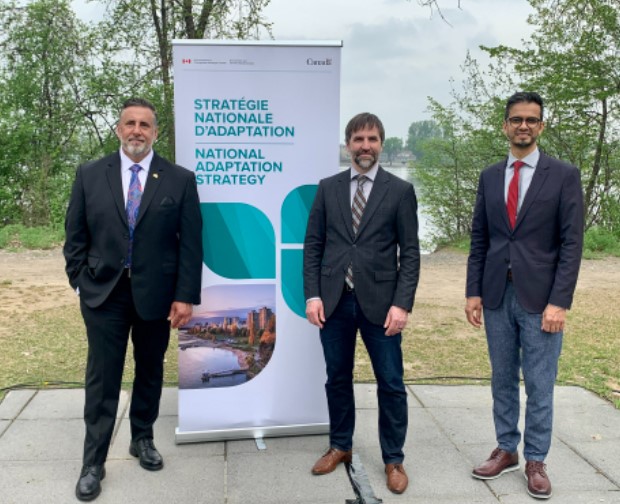 As spring flooding devastates communities in Northern and Western Canada, the federal government is looking for ideas on how to adapt to climate-related disasters.

A public engagement process was launched on Monday, to develop Canada’s first National Adaptation Strategy, a whole-of-society blueprint for coordinated action across the country Submissions will be accepted until July 15, on the letstalkadaptation.ca website.

In a news release, Environment Minister Steven Guilbeault called adapting to climate change “a two-front war” and said businesses and communities must “play both offence and defence” to lower emissions and find ways to lessen the impact of global warming.

“We must reduce carbon pollution and we must prepare for the impacts of climate change,” Guilbeault said, adding that climate-readiness includes measures such as preventing the construction of homes on floodplains, increasing tree coverage in urban forests to reduce the effects of heatwaves, and using data to map and manage the risks of wildfires.

To kick off the public consultations, the government published a discussion paper that sets out guiding principles and objectives for five key areas of focus: health and well-being, natural and built infrastructure, environment, economy, and disaster resilience and security.

The strategy will build on action being taken across the country, such as the federal Disaster Mitigation and Adaptation Fund (DMAF), now $3.4 billion for infrastructure projects to help communities better prepare for climate-related disasters.

The Government of Canada says the National Adaptation Strategy will be released this fall.

“Floods, fires, and other natural disasters have had devastating impacts on our communities, and the reality of climate change means events like these will continue to increase in scale and frequency,” said Bill Blair, minister of emergency preparedness.

The Insurance Bureau of Canada found that severe weather caused $2.1 billion in insured damage in 2021 and said that the “new normal” for insured losses from severe weather events across Canada is $2 billion per year. Uninsured losses are estimated to be double that amount.