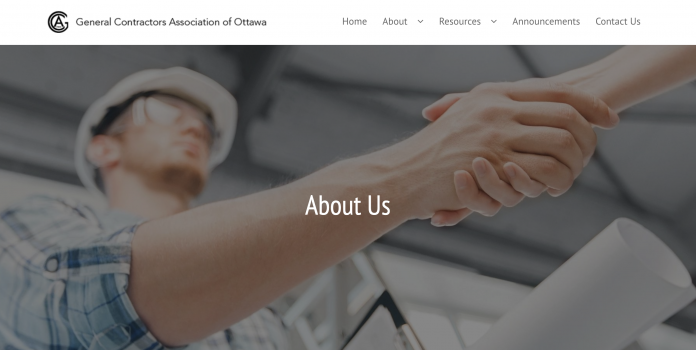 The General Contractors Association of Ottawa (GCAO) has reported in its spring newsletter progress on several tendering practice issues.

The association intervenes when members believe that a project’s owner/tendering authority has introduced unfair or unreasonable conditions to its tendering process, advocating for members in promoting “the adherence to approved industry and fair and equitable practices in competitive tendering and contract administration.”

“Earlier this year the GCAO received several member complaints regarding the Egyptian Residence tender and questionable Supplementary General Conditions (SGCs) including unreasonable markups, and deletions of references to the Lien Act.

“A letter was issued by the GCAO to the owner group and was followed up with phone discussions on the matter. Although the owner did not adjust their SGCs, members took it upon themselves to qualify their bids to reference an ‘unmodified CCDC-2 contract’. As a result, the owner group was forced to accept and negotiate with the low bidder on this basis. GCAO is proud of its members for speaking up and acting in the face of unacceptable tendering practices.”

“Your association was able to setup a meeting with Mr. Gary Nower (assistant vice-president facility management and planning) from Carleton University. We met him along with the OCA (Ottawa Construction Association) standard practice committee on April 9 to address our members’ concerns about some of their tendering practices.

“We voiced that they were one of the only clients in the Ottawa area with this type of financial obligation.

“And finally, we discuss(ed) the recent situation where a general contractor had issued a “post tender addendum” to all Ottawa area subcontractors, after he was awarded a contract by Carleton University, even if there was a requirement on the tender form to name all the subcontractors included in the original proposal. Mr. Nower promised to investigate this issue and to take appropriate action.”

“Following multiple complaints from our membership with regards to a clause in The Ottawa Hospital procurement documents, specifically a contract clause noting ‘any claim by the Contractor for delay shall apply only to the extent that the delay exceeds two calendar months…..’ led to the (GCAO) board producing a letter to the TOH procurement voicing our memberships concerns with such unfair and unreasonable language. At the time of this newsletter, we are still awaiting a response.”

The GCAO also published report from legal counsel Norton Rose Fulbright regarding concerns about owners either not releasing or taking a lengthy time to release bid results.

Member discussions led to the idea that contractors could possibly share post-tender data, via the GCAO website, for an “unofficial bid result”.

“Understanding this delicate situation, the board sought legal advice on the feasibility of this tendering process,” the GCAO newsletter reported.

The lawyers’ six page report suggested this sort of association-led disclosure could create problems with the Competition Act provisions to prevent bid-rigging, especially in situations where a project is retendered after the association had made the news public.

The lawyers recommended that, “in order to avoid legal risk, GCAO should press the owner/sponsor to make public information quicker. Depending on what type of owner/sponsor is involved, there may be provincial legislation available to help push for speedier publication GCAO position.”

“Following Norton Rose Fullbright’s preliminary expertise the (GCAO) board is now sourcing its members for opinions and advice with regards to publishing post tender results and if we should continue exploring different options considering the hurdles that were placed in our path,” the newsletter reported.