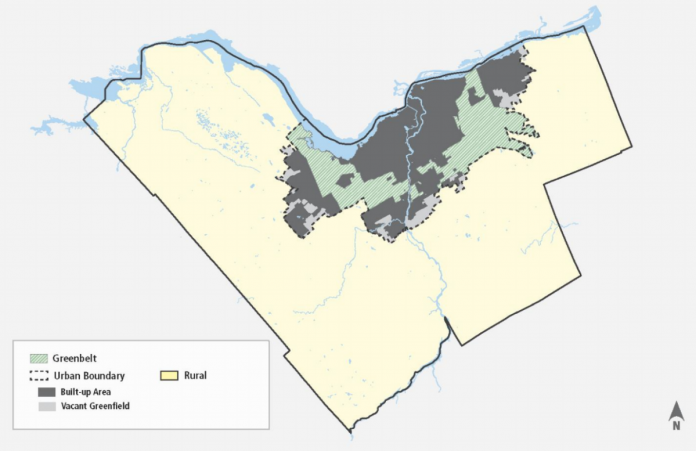 The Greater Ottawa Home Builders’ Association (GOHBA) is calling on members to reach out to municipal leaders to raise concerns about city’s staff Official Plan recommendations.  Staff propose increasing the intensification rate from 40 per cent to 60 per cent, while limit t he urban boundary expansion to 1,3500 to 1,650 hectares, says David Renfroe, chair of the GOHBA’s Builder Developer Council, which represents most of the city’s major tract builders.

Although city planners presented the recommendations as a “balanced scenario”,  Renfroe, advised other GOHBA members in an email last Thursday that “we do not believe this intensification rate increase is in anyway realistic, and that their plan is not sufficient to provide for the 195,000 homes we need to Ottawa’s population growth rate over the next 25 years.”

See: Ottawa prepares to add as much as 1,650 hectares to suburban development in updated Official Plan

City staff had asserted that their proposal would require that 51 per cent of new dwellings to be in existing, built-up areas, with an intensification target that would rise to 60 per cent by 2046. “That small increase to intensification targets would reduce the need for expansion considerably,”  staff indicated.

This, the planners said, would be considerably less stressful than the “no expansion” scenario, where 64 per cent of new dwellings would need to be in existing, built-up areas. By 2046, 100 per cent of all new housing would be delivered through intensification – requiring much more aggressive intensification targets, if the city went to this extreme.

But Renfroe and other builders say the numbers proposed by city staff would still result in extreme challenges and possibly defeat the objective of avoiding urban sprawl as people seeking affordable single family homes move to communities totally outside of the city’s jurisdiction.

The proposed Official Plan amendments will be considered at a joint meting of the Planning and Agricultural Affairs Committee on May 12.

Renfroe asked GOHBA members to “urge councillors to adopt a growth scenario that calls for a more modest increase in intensification to 50 per cent, and slightly more land so that we can provide housing affordability and choice now and in the future.”

“The decision made on May 11th will directly affect land values and the housing industry in Ottawa for decades to come,” he wrote.

Renfroe observed in his note (and asked members to express some of these points in their communications) that: