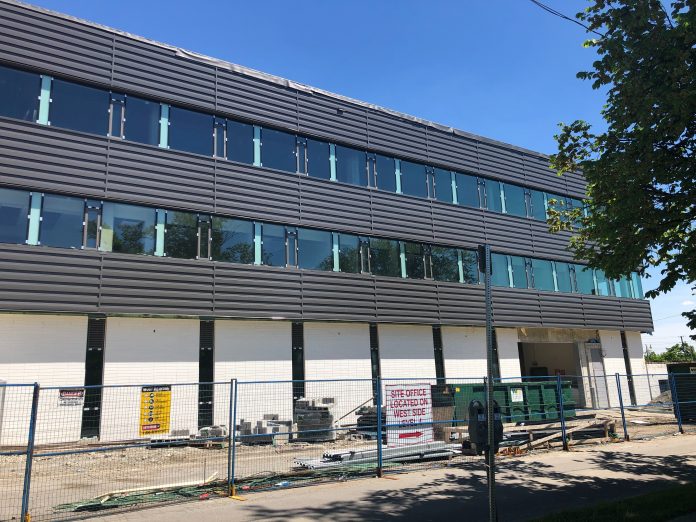 Construction at Guelph’s revamped Police Headquarters is still underway, while a new east wing that contains main entrance and reception, upgraded security, and a community room off of Wyndham Street is open for use.

The interior and exterior of that wing has been completed, while the outside is prepared for landscaping. The four-storey western wing is nearly done, and includes fleet parking on the lower two levels, and office space on the top two floors.

Guelph Police Services (GPS) is renovating to stay ahead of policing needs in a growing municipality.

The building is getting an expansion and upgrade that will bring the building up to modern health and safety standards, and provide room for operations and personnel into the future.

The Wyndham Street GPS headquarters is being hollowed out and the insides rebuilt, and two new wings have been added to the structure.

The new facility is laid out for efficiency, with groups that interact with the public grouped together near the main entrance. The update maintains health and safety and legal requirements for detainees, and is designed to withstand a major disaster.

A $34.1 million budget was approved for the project in 2014, with the cash flowing from a mixture of development charges and tax funds. Construction began on the two wings in May 2016, while renovations began in December 2017.

Jasper Group and CS&P Architects are heading up the project. Original completion date was set for spring of 2019, but has been pushed back to the end of the year due to delays along the way, including difficult weather conditions during the 2017-2018 season, increased excavation time because bedrock was more extensive than originally thought, and the complexity of working with an existing building as opposed to starting from scratch.