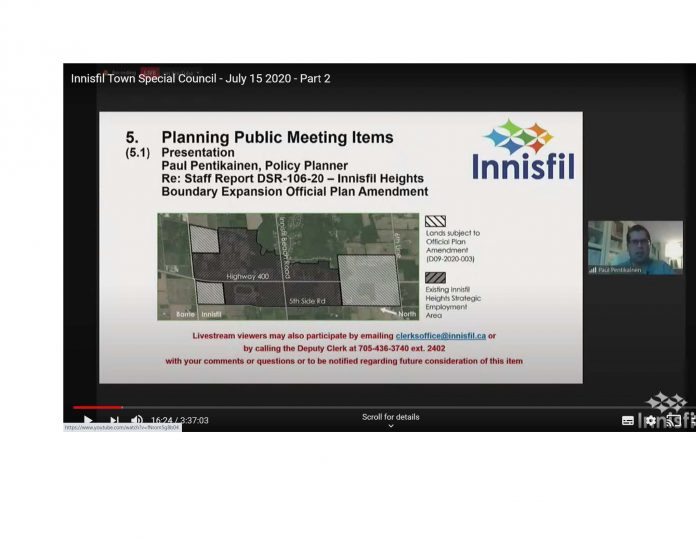 After more than a decade, it appears the Town of Innisfil will be allowed to expand the boundary of the Innisfil Heights strategic employment area.

Official Plan Amendment 1, designating a commercial/industrial corridor along Highway 400 and included development to increase the town’s population to over 100,000 was originally presented to council in 2008.

However, it has been delayed because it conflicted with Ontario’s 2—9 Growth Plan for the Greater Golden Horseshoe – a document that assigned growth to designated areas.

As reported by Innisfiltoday.ca, the land in question runs from Line 7 northward along Highway 400 towards Barrie. Identified uses were restricted to industrial, manufacturing, warehousing and outside storage, with limited support uses, such as office space.

On April 30 Minister of Municipal Affairs and Housing Steve Clark announced the expansion of the area to the border with Barrie, and lands between Innisfil Line 6 and 7 – adding about 240 gross hectares to the Innisfil Heights settlement area.

The Innisfil Heights Official Plan Amendment application was discussed at a planning meeting last week and the town identified “a future expansion to Line 5 – a reserve area for future development.”

According to a staff report presented at the meeting, more than 40 industrial-related inquiries have been received since 2018, most developers looking for serviced land that is five to 10 acres in size. Innisfil is developing a community planning permit system to streamline rezoning, site plan, minor variance and vegetation removal applications into a single process, hoping to speed applications.

The land is now serviced with municipal water, but high costs have prevented sewers from being extended to the area. According to Innisfiltoday.ca, the town is entering into a strategic agreement with the County of Simcoe regarding financing, and looking to the Innisfil Heights developers’ group, to discuss front-ending and development charges prepayment agreements.

The OPA could be approved by the end of the year allowing applications to proceed through site specific rezoning.

“There is excitement in seeing this move forward after a 10-year stalemate,” said Mayor Lynn Dollin, thanking the City of Barrie for withdrawing previous objections.