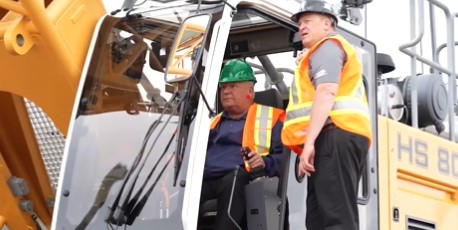 One of the last campaign stops for Progressive Conservative Leader Doug Ford was a visit to the International Union of Operating Engineers (IUOE) Local 793 training campus in Oakville on Friday.

Business manager Mike Gallagher announced IUOE Local 793’s endorsement of Doug Ford and the Ontario Progressive Conservative Party, noting “a commitment to the skilled trades in Ontario, their strong emphasis on safety and training, and promise to invest in infrastructure.” 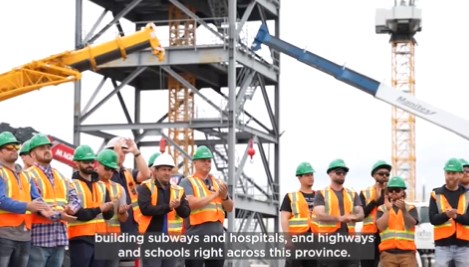 “Each of these organizations knows what it takes to build and each of these unions are lining up behind our plan to build Ontario,” Doug Ford said. “Every day more and more people are lending their support for our plan to build Ontario and nowhere is that support growing more than among our women and men who work in the skilled trades. I’ve been so proud to welcome the support of a growing number of unions representing the women and men who are building Ontario.”

Pointing to the apprentices lined up behind him, he said, “Make no mistake, each and every one of these folks, they’re helping to build Ontario. We couldn’t build anything if it wasn’t for the cranes right here, so I am very, very grateful.”

Gallagher gave three reasons why the union has switched its support to from Liberal to Ford’s PC Party in this election.

“The number one reason would be his leadership,” Gallagher said. “Doug Ford has shown his leadership throughout the last two years where we had an unprecedented pandemic, and he was able to adapt to changing circumstances that happened very quickly.

“The ability to keep everyone informed on a weekly basis as Premier Ford did at the time was absolutely essential to the safety of the people here in the province of Ontario and to our members of Local 793.”

A commitment to spend $158 billion on in much-needed infrastructure projects was the second reason.

“We need to keep the economy going, especially with the impact of inflation and the pandemic that we went through,” Gallagher said. “We fully support the investment in needed infrastructure and the commitment to affordable housing which has been made.”

The third reason for endorsing Ford, Gallagher said, is the commitment to skills training, compulsory certification and mandatory training.

“Here today we have a graduating class of our students who will go out into the industry and help build it for the future and we need jobs,” he said. “We need jobs for them and we need support for our skills training. So, it’s definitely hats off to the Premier and his team.”