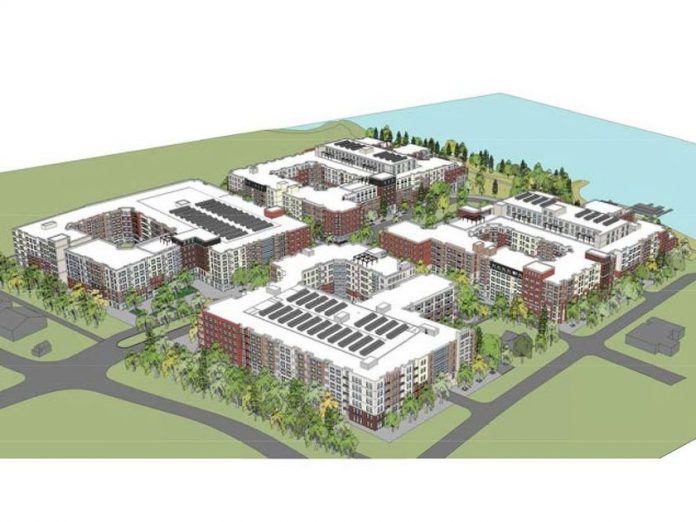 A proposal originally rejected by Kingston Council two years ago has been scaled back to make it “more visually appealing” and ensure it complements nearby cultural heritage features.

A new plan, detailed in a report to council Tuesday, has the buildings closest to the water reduced in height to four or five storeys and increased height – up to eight storeys – above the parking garages.

The buildings could also include greater interaction between public and private spaces and a greater setback from the water’s edge and the use of wood as a building material is expected to be encouraged in the development.

“Over the past year, staff have been working alongside the applicant with the assistance of Brent Toderian (TODERIAN UrbanWORKS)¸ to refine the development concept to achieve variation in building height and massing, increased building articulation, improved public realm, and to improve the way in which the proposed buildings interact with the cultural heritage significance of the Rideau Canal,” interim chief administrative officer Lanie Hurdle wrote in a report to council.

“The development concept has also evolved to provide greater setbacks from the Rideau Canal with a naturalized shoreline.”

The subject lands have a total area of about 13 hectares. The proposed redevelopment applies to a nine-hectare area of the subject lands. The city estimated cleaning up the property would cost about $66 million.

Because of the condition of the property, it will likely qualify for additional brownfield funding to clean it up.

In order to support a feasible redevelopment of what is known as the largest and most contaminated brownfield property in city, an amendment to the current Brownfields CIP will be required to create a special project area for the subject lands that will increase financial benefit levels and timelines so that a greater recovery of environmental remediation costs can be achieved.

Public open houses are proposed to be held by the applicant Dec. 5 and 10 to present the revised development concept and the evolution of the design.