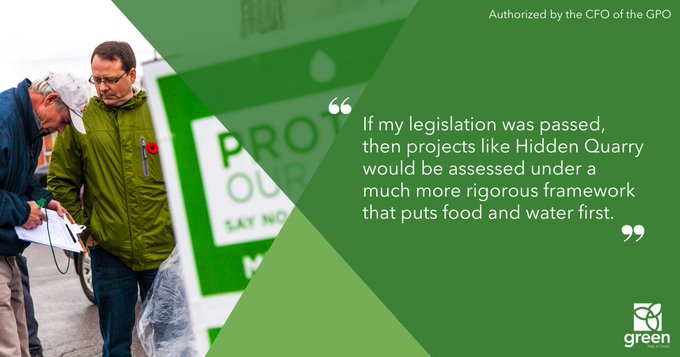 The Hidden Quarry near Rockwood will go ahead, after the Local Planning and Appeals Tribunal’s long-awaited decision was issued on Feb. 11, ruling in favour of applicant James Dick Construction Ltd. (JDCL).

JDCL has owned the 61.5-acre site at Highway 7 and 6th Line just outside Rockwood since 1989. The operation has a green light – with some requirements.

“The site is underlain by dolostone bedrock, a provincially significant resource used in the manufacture of high-quality concrete and asphalt,” stated LPAT member Scott Tousaw in his final decision.

It has been an eight-year long road to approval.

JDCL first applied for a bylaw amendment to allow aggregate extraction on the site in 2012. When Guelph-Eramosa failed to make a timely decision within two years, the company appealed the non-decision to the LPAT in 2015.

The hearing was put on hold in fall 2016 when it was discovered the bylaw to which the application referred was repealed and replaced earlier that year by the township.

JDCL filed its second application to Guelph-Eramosa and Wellington County at the end of 2016. Neither municipality made a decision in the allocated timeframe LPAT hearing was held in July 2019.

Tousaw’s decision was not made until Feb. 11 and he included two pages of conditions, including the creation of a community liaison committee funded by JDCL.

Guelph MPP Mike Schreiner and residents who have spent years fighting against the site say they are disappointed.

“This is a devastating decision for citizens in Halton Hills and Wellington County who have worked so hard to defend a precious resource – the water we drink,” he said in a press release.  “Nothing is more important than protecting the long-term supply of our drinking water, and yet Ontario’s weak aggregate and water-taking rules continue to put private profits first.”

However, Tousaw says his decision came from the “basis of the reasonable assignment of risk.”

“There is never ‘no effect’ on the environment from development, but if risk can be assigned to the economic endeavour in such a way as to protect the environmental features and functions at the standard of the legislative tests, then a development may proceed,” he said.

He says “threshold issues” met the legislative tests for approval of the quarry, including:

Tousaw also singled out Wellington County for not providing a planning report.

“Somewhat perplexing to the tribunal was the absence of a planning report from the county, despite the number of years these applications were in process,” Tousaw wrote. “The consulting planners were not aware of a county planning report and were unable to refer to one in evidence.

The ruling called the “void” unusual and unhelpful.

Schreiner says he introduced the Paris Galt Moraine Conservation Act in the Ontario Legislature in order to ensure projects such as the Hidden Quarry are evaluated under more strict evaluation.

“If my private member’s bill was passed, then projects like this would be assessed under a much more rigorous land-use planning framework that puts food and water first,” he said.

“Without such a framework, we are allowing industrial pressures on our water supply to pile up, on top of drought and other threats brought on by climate change.”

Further appeals can only be made to the L-PAT if there are errors in law made by the tribunal.

“I want to thank the local governments and citizens who spent time and money opposing this quarry and protecting our water and communities,” he said, promising to “support people pushing for stronger laws to protect the natural environment that gives us the water we drink.”