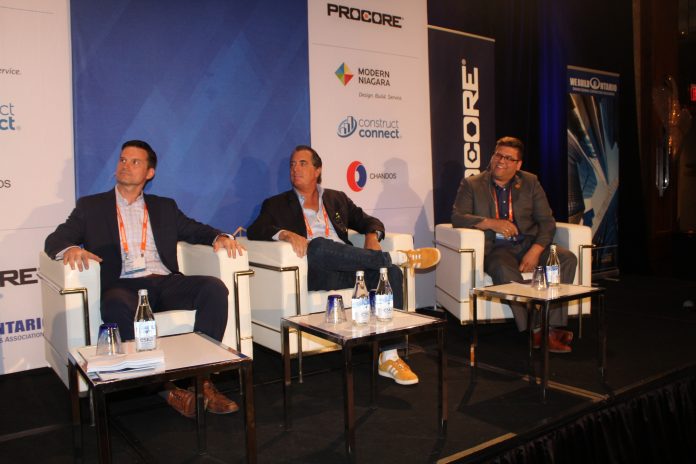 How is the construction industry adapting and embracing technological change?

Winters described a “significant resistance to innovate and change” when he arrived at the national mechanical contractor three years ago. “But that has changed dramatically over the last three years – it has been up to the leadership team to introduce the benefits of innovation.”

Courtemanche, whose company provides cloud-based construction management software, said the construction industry has always lagged other industries in technological adaptation, but this changed beginning with the advent of inexpensive mobile technology around 2010.  The I-Phone and tablets solved the problem of job-site technological access.

Coldwell from Chandos, meanwhile noted that innovation must be rooted in the workplace and relationships, and that “people want to have a sense of meaning and purpose in their work.”

“Introducing change has to be methodical,” Winters said, describing how the company started changing employees’ attitudes towards innovation and technology. “Three years ago, we started to give I-Phones to every project foreman on our list, and showed them how to use them. We had to create awareness, give them knowledge an keep going to support them along the way.”

Courtemanche said Procore is constantly innovating and improving its products by listening to clients and absorbing their ideas.

Many changes and technological advances aren’t “bleeding edge” but are new for the industry, Winters said. These include workflow automation and invoicing applications, and these “are some of the things we can do that don’t cost a zillion dollars to do.”

He said the construction industry could be ripe for disruption, much as the taxi industry was revolutionized by Uber and hotel and accommodations face AirBNB as a new challenge. “We are doing whet we can to be ready for this disruption. “We’re going to be able to pivot and adapt and maybe cause a bit of disruption ourselves.”

Courtemanche said that the construction industry is due for a major change as finally technological advances impact on productivity. He says in the cloud based system, Procore is starting to gather “a tremendous amount of data” that can be adapted and shared to create safer job sites with predictive analysis. “I think the industry can get much more efficient.”

He said his company has worked extensively with Integrated Product Delivery (IPD) – changing the customer experience and creating a market that didn’t exist in Canada before.

There will be a trend towards factory assembly of building components “as opposed to co-prdianting work on site” and in fact Chandos is investing in a plant to produce prefabricated “washroom pods” offsite.

Coldwell said there are challenges in deciding where to invest and focus on change – realizing as well that there’s “a cost to not investing (in change).”

“We focus on stuff that is disruptive and pull out the stops there in a few small areas,” he said. “If you start investing in something big, it takes two to three years before you get a payback for that.”

Winters described a “rigorous process of going through and vetting and improving any investment” based on “what’s in it for our people” at Modern Niagara.

That said, even small changes can have big results. “If we can introduce an innovative change that shaves 15 minutes from a foreman’s time each day, with our population of foreman, that’s a savings of $1.4 million in labour costs.”

Of course the value of this efficiency depends on what individuals do with their extra free time, but Winters said if foreman and superintendents are “freed up” and can be “out in front of the crews and supervise them better” the productivity and quality gains will far exceed the costs of technology.

What is the next big thing ahead?

“AI (artificial intelligence) is the buzzword – big data, the cloud, and machine learning. It is real,” Winters said. “What can we do to actually drive labour optimization, material optimization, with analytics to do things better and faster for customers?”

Coldwell of Chandos said he anticipates big changes in the supply chain, especially relating to prefabrication.  In some cases, 90 per cent of skilled labour has been cut out of the job site as integrated systems and global supply chains are developed to design and produce building components, delivering them to site where the pieces are assembled.

He also said his company has found advantages by being ahead of trends and client demands for socially responsible changes such as waste diversion. When clients began demanding these services, Chandos had already developed systems and processes to make it easy for them to compete in fulfilling the requirements. He also said clients want more transparency in information.

Coldwell at Chandos said “you have to paint the aspiration and picture of where you are going. It’s all about buy-in. Don’t be shy or scared if it doesn’t work, as long as the tries are in the general direction of where you want to go.”