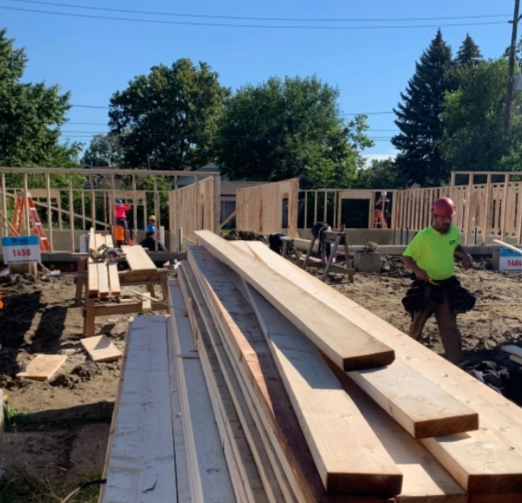 A strike by more than 15,000 skilled construction workers in the Toronto area who voted over the weekend to reject proposed contract settlements is already impacting residential construction projects.

“All high-rise sites are currently completely shut down across the GTA and low rise are being impacted as several sectors (house framing, tile, carpet and hardwood installers, and railings) are also on strike,” said Jason Ottey, communications director for Labourers’ International Union of North America Local 183, which represents the striking workers.

Local 183, with more than 58,000 members in the GTA, said the job action involves workers in several sectors of the residential construction industry, with wage increases in a climate of surging inflation the key stumbling block.

In a statement the local said high rise forming, self-levelling flooring, house framers, tile installers, railing installers and carpet and hardwood installers have all rejected proposed settlements.
“LiUNA Local 183 members were deemed essential throughout the pandemic and continue to serve in one of the GTA’s fastest growing construction sectors,” said Jack Oliveira, LiUNA Local 183 business manager. “Our members are at the frontlines of the region’s growth and deserve fair pay and benefits for their work and service to the community.”
LiUNA Local 183 is calling on the Contractors’ Associations to return to the bargaining table with employment terms that “address the costs of inflation and demands on the sector over the coming years.”
Employers in other construction sectors and other parts of the residential sector have offered employment terms and conditions that better reflect the current cost of living and anticipated increases in inflationary pressures over the life of the collective agreement, the union added. An employer negotiator could not be immediately reached for comment.
“The residential sector is amongst the most in-demand industries for the GTA and will continue to be sought after for years to come. [Workers] deserve compensation that reflects their contributions to the industry,” added Oliveira.
“Our members work hard and are critical to building housing across the GTA. We’re ready to get back to work, but the Contractors’ Associations needs to offer a fair proposal that respects our members and the work that they do.”

And while the strike adds to housing construction industry challenges posed by soaring costs and pandemic related supply chain disruptions, strikes in residential construction in parts the GTA have a limited window – they cannot exceed six weeks under Ontario legislation, after which time any outstanding issues must be settled through binding arbitration.

In other contract bargaining developments, meanwhile, LiUNA Local 183 members in the provincial ICI sector in sewer and watermain forming, concrete and drain, as well as low rise forming voted in favor of tentative contract proposals on Sunday and the new contracts went into effect on May 1.

Results of weekend voting by Labourers’ Union members in the provincial ICI sector across 10 locals in trades including mason tenders are being tabulated and will be available in about a week, a spokesperson said. Those workers, who entered a legal strike position on May 1, are voting on a compensation proposal the union says falls short of some agreements in Ontario’s construction industry and which it is not actively endorsing.