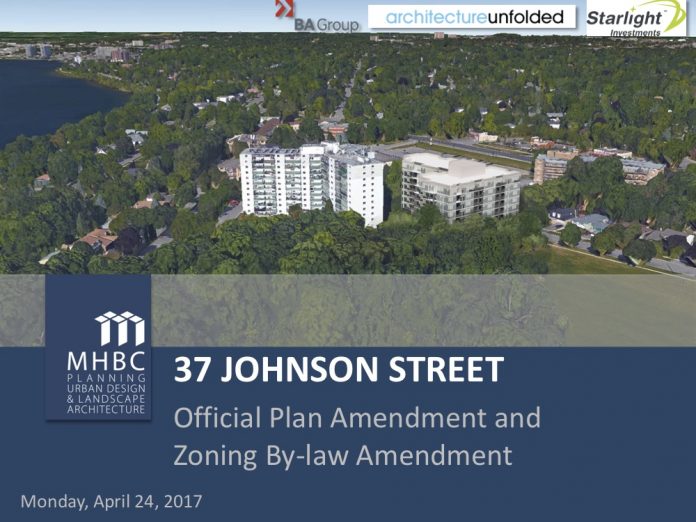 An 11-storey apartment building plan rejected by Barrie city council has been approved in a ruling by the province’s Local Planning Appeal Tribunal (LPAT).

The tribunal released a 48-page ruling Oct. 11, determining the proposed development is consistent with the Provincial Policy Statement on land-use planning, conforms to the Greater Golden Horseshoe Growth Plan, and adheres to the city’s Official Plan. Therefore, it should be approved.

The 1.42-hectare parcel of land is located at 37 Johnson St., just up the street from Johnson’s Beach in Barrie’s east end – next to an existing 11-storey building consisting of almost 200 units, which was built in 1973.

In Sept. 2017, Barrie council unanimously rejected the official plan and zoning-by-law amendments requested by the developer.

A hearing was held back in January after the developer, D.D. 37 Johnson Ltd. (Starlight Investments), filed an appeal.

“Elements to help buffer the development from the lower density homes to the north are provided,” she added. “Additional improvement will be provided through the site-plan process.

The improvements and enhancements to the appearance and functionality of the site, and this reinvestment improves the overall character of the community.”

The new building, to be built on vacant land along Indian Arrow Road behind the existing structure, would result in two large apartment buildings in the area of Johnson and Blake streets. Combined, they would have more than 400 units.

The tribunal ruled the project is compatible with its surroundings.

At the time of the hearing, former ward councillor Bonnie Ainsworth said she also had concerns over the project “dropping 300 people into the area which I know can’t handle that kind of intensification.”

However, one of the witnesses called on behalf of Starlight, Eldon Theodore, an agent for MHBC Planning Urban Designs and Landscape Architecture, said no such concerns were raised by public service agencies or the nearby businesses.

“The development also lines up well with the city’s affordable housing goals and it is my opinion that the growth management goals have been met,” Theodore said at the hearing.

Province shuts down much construction because of COVID-19; narrows list of “essential workplaces”