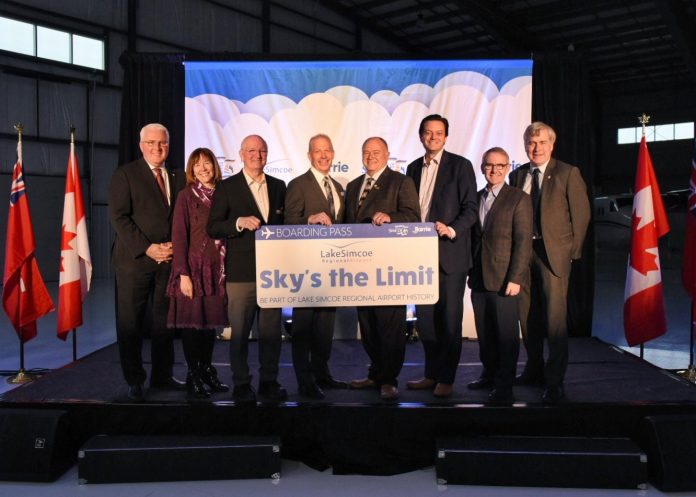 Plans for growth are starting to take off at the Lake Simcoe Regional Airport near Barrie.

The County of Simcoe and City of Barrie held a news conference last week to announce chartered air service to The Big Apple will take off starting next year.

The first round-trip to New York City – with a stop in Peterborough – will depart from the Oro-Medonte airport in Sept. 24, 2020 and CWT Vacations/Blowes & Stewart Travel Group, says it hopes to eventually add new destinations. The company currently offers charter flights from Peterborough to Montreal, Boston, New York, Chicago and New Orleans.

The price is roughly $1,300 per person, including hotel accommodations for three nights and daily breakfast. Taxes are extra. Airfares include complimentary snacks/meals and full beverage service, including alcohol.

In January the County of Simcoe will acquire an increased ownership stake in the LSRA and together with the City of Barrie, will oversee growth and expansion at the site. The County will make long-term investments towards elements of the LSRA strategic plan, which includes completing required studies, consultations, and approvals to expand the runway and support the development of a business park and infrastructure on the site, among other growth and job creation initiatives.

Upgrades will keep ensure LRSA is prepared to serve the expected growing population in the region. By 2014, it’s estimated that Simcoe County will grow to more than 800,000 people.

Phase 1 upgrades to occur in the next decade include:

It is a CBSA Commercial Port-of-Entry for passengers and freight with a cumulative 100,000 sq. ft. of commercial hangar space.

LSRA consistently ranks in the top five busiest airports without control towers nationally according to Statistics Canada and there are currently 11 businesses based at the airport directly employing over 70 people.

“The LSRA represents a world of potential for Simcoe County, and today’s announcement confirmed that the sky is truly the limit when it comes to the future impact that the airport will have on our economy, tourism sector and the growth of our communities,” Simcoe County Warden George Cornell said in a news release.

“We look forward to working with the City of Barrie to further develop this municipal asset to generate investment in our communities, create new jobs and to offer our residents exciting transportation options.”