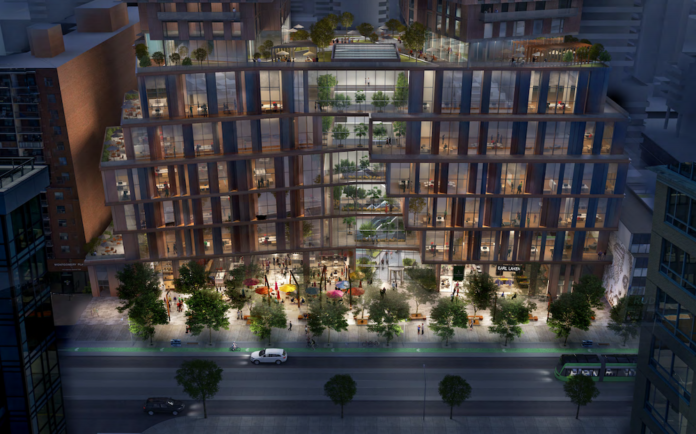 The Madison Group has proposed a dual condo tower with a sky-lit atrium along Eglinton Ave. E. In Toronto.

The developer, which is building the Nobu Residences Toronto two-tower structure at 15 Mercer St., under the city’s largest ($150 million) building permit issued in July, plans to construct new structure with a sky-lit atrium on the north side of Eglinton Avenue East, south of Roehampton Avenue and west of Redpath Avenue, DataBid.com says, citing Toronto Storeys.

The developer has submitted an Official Plan and Zoning By-law Amendment to redevelop the site at 150, 160, 164 Eglinton Ave. E. and 134, 140 Redpath Ave. with two residential towers, standing 43 and 46 storeys with a six story, mixed use podium.

The 5,172 sq. m. site is irregularly shaped and is currently home to five properties, with buildings used for commercial offices and retail spaces. The project’s highlight will be a 6-story tall sky-lit atrium and lobby, bringing 845 new homes to the area.

This site has been up for redevelopment before, DataBid.com says. An application was previously submitted in April 2015 to build a 39 storey, mixed use building with retail, office and residential uses. In May 2018, the City of Toronto adopted two zoning by-law amendments to permit a revised proposal, including a 46-storey structure and an increased 429 residences.

The latest development proposal will maintain elements of the original approval, including the construction of a mixed-use development that will provide a mix of new residential and retail uses and additional office space.

An 11,172 sq. ft., privately owned but publicly accessible space  (POPS) fronting onto Eglinton Avenue East is also proposed. A second 6,276 sq. ft. POPS is proposed at the site’s rear, extending from the building lobby’s rear doors and through 134 and 140 Redpath Ave.

The 6-storey podium building will contain lobby entrances to the east and west towers and five retail entrances near the centre. Offices will be reached from the central lobby, which will be six stories high in areas.

In the mezzanine level, there will be lockers, bicycle storage spaces, amenity rooms, while the second, third and fourth floors will combine office spaces and outdoor terraces, the planning applications show.

As well, 14 live-work units have been proposed on levels five and six with access to private terrace and meeting rooms. There will be three underground parking levels.