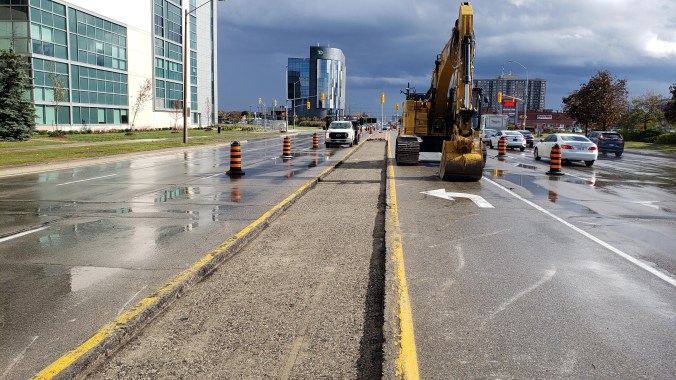 Major construction for the Hurontario light rail transit (HuLRT) is expected to start along the city’s portion of Hurontario Street later this fall.

Over the past year, crews have worked to shatter and haul away medians built along the Hurontario light rail transit (LRT) route. The medians will eventually be replaced by tracks, stations and equipment needed to run the new transit system.

Before the tracks are put into place, the area will act as a drivable roadway to allow traffic to shift easily around the utility relocation work slated for later this fall.

“Upon completion of the median removal work, crews embarked on borehole investigations along the route. This work is the first part of site assessment work, and as part of the Hurontario LRT project, Metrolinx is required to evaluate the physical properties of the area where the LRT will be built. Boreholes are being drilled at various points along the Hurontario corridor to collect soil and rock samples for further laboratory testing,” said Erika D’Urbano, Metrolinx senior advisor for Rapid Transit.

Borehole investigations require a small drill rig to dig a deep hole into the ground. Once the sample point has been reached and the required sample is collected, it is sent for testing.

By understanding the soil, groundwater and bedrock characteristics along the rail alignment, Hurontario LRT constructor, Mobilinx, is able to optimize and complete the design work for the LRT foundation. The information gathered is used to create detailed engineering plans for construction activities.

This fall, construction will begin on the light rail transit route in Brampton, including utility relocations, including watermain and telecommunication infrastructure relocation, followed by removal of the boulevard and widening Hurontario Street.