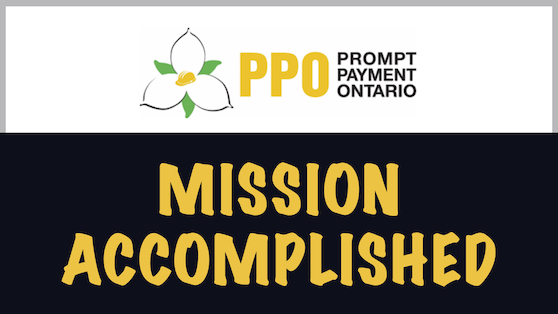 Prompt Payment Ontario (PPO) —an organization formed to help establish prompt payment for the province’s construction subtrades—has achieved its objective, and has dissolved.

“We are happy to say, ‘Mission accomplished!’, and we believe the actions of PPO will have substantial, long-term benefits for the industry,” Sandra Skivsky, Ontario Masonry Contractors, one of the founding members of PPO, said in a statement earlier this month.

In all, 42 organizations invested in PPO with the understanding that, once it had met its objective, PPO would refund any monies that were not spent and the organization would be dissolved.

However, in their discussions leading to the dissolution, Skivsky says a number of organizations (30) voted to donate their share of the refund to charity. As such, as its final action in the dissolution process, PPO has disbursed the remaining funds of $106,119 to three charities, each of which will receive $35,373:

Skills Ontario, which aims to inspire the next generation of skilled trades and tech leaders.

“Trade contractors are always giving back to their communities, and this generous donation is yet another testament to the fact that they are proactive in supporting their current and future skilled workforce,” said Ian Howcroft, CEO of Skills Ontario. “We are so humbled to have been recognized at this level, and we congratulate PPO and its representatives for reaching their objective, and we thank them for their contribution.”

Veterans’ House, Multifaith Housing Initiative’s fifth housing community and first house built exclusively for veterans who are homeless or at risk of homelessness.

De Novo Treatment Centre an alcohol and drug treatment service operated as a partnership between management and unionized members of Ontario’s construction trades.

Prompt Payment Ontario was launched in the Fall of 2014 as a “single-issue organization dedicated to promoting and achieving Prompt Payment Legislation for Ontario’s construction industry”, explained ECAO’s executive director at the time, Eryl Roberts. Membership was open to all stakeholders who supported and wished to participate in achieving this goal.

Several months later, in early 2015, the province announced it would launch an expert review of the Construction Lien Act, which would include the examination of payment issues within the construction sector.

In the Fall of 2016, the Office of the Attorney General released the long-awaited results from the review—“Striking the Balance: Expert Review of Ontario’s Construction Lien Act”—which was led by construction law experts Bruce Reynolds and Sharon Vogel of Borden Ladner Gervais LLP.

In February 2017, PPO  published ab interview with Bruce Reynolds and Sharon Vogel: Canada is watching Ontario’s Construction Lien Act review. At that time, their report was just that… a report, nothing more.

Spring 2017, Ontario’s Attorney General Yasir Naqvi introduced legislation that would, if passed, modernize the lien and holdback process, introduce rules to ensure construction workers get paid in a timely manner, and make the dispute resolution process faster and simpler.

Ontario Construction News started publication in May, 2019, based largely on changes in the Ontario Act that allowed Certificates of Substantial Performance (CSP) and other legal notices required by the act to be published in a digital daily construction trade newspaper.

In a statement, Skills Ontario thanked PPO for its contribution

“Ontario’s construction sector continues to promote Skills Ontario, and we are thrilled and honoured to have this support,” says Ian Howcroft, CEO of Skills Ontario. “Trade contractors are always giving back to their communities, and this generous donation is yet another testament to the fact that they are proactive in supporting their current and future skilled workforce. We are so humbled to have been recognized at this level, and we congratulate PPO and its representatives for reaching their objective, and we thank them for their contribution.” 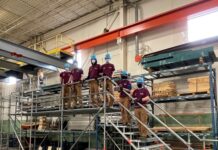 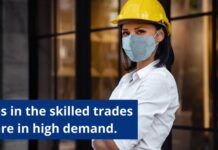