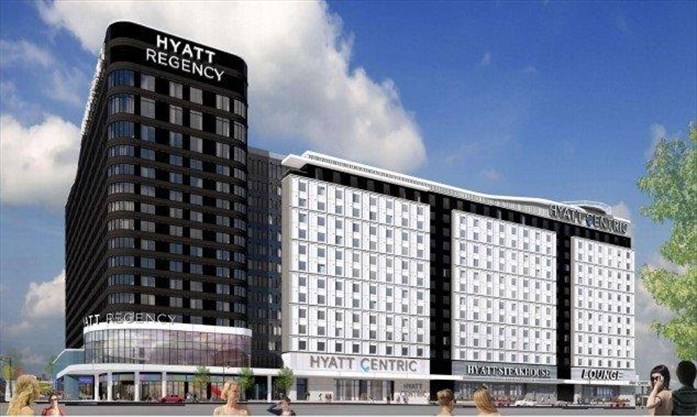 Niagara Falls will be getting two new hotels – a 16-storey Hyatt Regency and a 14-storey Hyatt Centric with a combined 1,095 rooms at Fallsview Boulevard and Murray Street in Niagara Falls.

Construction costs are estimated at $200 million, according to Italia Gilberti, a partner at the law firm Broderick and Partners representing hotelier Carmen Menechella.

“The site is located in the middle of the Fallsview Tourist District, where hotels up to 30 storeys are expected,” Alex Herlovitch, director of planning, building & development wrote in a report to council.  “As discussed under the architectural design review, the project meets the intent of the built form policies and the related architectural design guidelines.”

As reported in the Niagara Falls Review, politicians approved Menechella’s zoning bylaw amendment, allowing the project to move ahead on three parcels of land: 1.8 hectares at 6289 Fallsview Blvd., near Murray Street, 0.3 hectares at the southwest corner of Fallsview Boulevard and Robinson Street and 3.18 hectares at 6046 Dunn St.

The current zoning limits building heights to 12 metres. The 16- and 14-storey hotel towers will be 67 and 53 metres in height, respectively.

While the Best Western is being retained, other buildings on the property have been demolished.

“Construction has begun in accordance with the three-storey site-plan approval, which we obtained several months ago,” Gilberti said. “Construction and refurbishing costs will exceed $200 million, on top of the “significant” land acquisition costs.”

“They’re at every event, they’re at every charitable (function). If there was any company that should be congratulated on investing and reinvesting in our town, in our community, in our people, it’s this particular company,” Councillor Vince Kerriosaid is quoted saying in the Review.