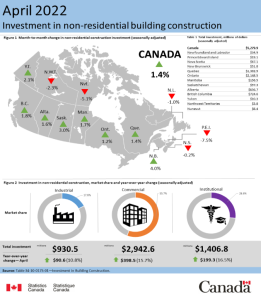 Investment in the non-residential construction sector increased for the ninth consecutive month in April, jumping 1.4 per cent from March to reach $5.3 billion, according to Statistics Canada.

Overall investment in building construction was also up by 2.7 per cent to $20.9 billion, with increases reported in the residential sector.

The StatsCan report also shows residential investment has been on a steady climb or the past seven months, up 3.2 per cent to $15.7 billion in April. British Columbia led the way with more than eight per cent growth as it reached a record high of slightly more than $2.4 billion.